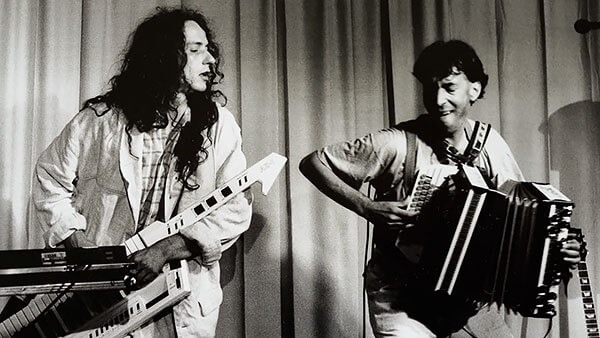 Hubert von Goisern and Wolfgang Staribacher met at the end of the eighties, when they were both solo performers in Vienna. They composed together, played many concerts and also appeared in the alpine Watzmann musical. Their CD Alpine Lawine was released in 1988. However after disagreements, they played their last concert in 1991 and went their separate ways. Hubert continued the Alpinkatzen project with a new band lineup. 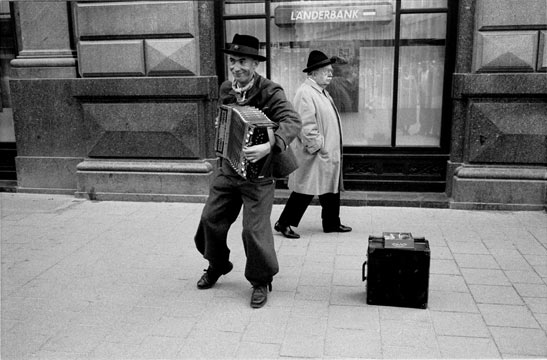 How often did you entertain the pedestrians on Kärntner Straße with your music?

I only played on the street a few times. Perhaps five or six times in the 7 years I live in Vienna. Although I had no money, that wasn't an incentive. The reason was rather a depression, a feeling of isolation and a longing for the mountains and forests of home. When I played on the streets with my eyes closed, I was "at home" and I felt secure.

Playing on the street was a good way of practising as I was concentrating on making it sound good. I didn't have a repertoire as such. I would improvise and sometimes that would lead me to melodies that I already had in my head. The zieharmonika is excellently qualified for such playing, because it simulates a whole orchestra. And the diatonic zieharmonika especially makes learning harmony (at least the Occidental) tangible in the truest sense of the word.

What was a typical working day for you back in 1987?

I would usually get up at 7, make myself a big cup of tea and start to practise straightaway. My main instrument then was the guitar. I would practise scales and arpeggios for four to eight hours every day and spend at least another 2 hours with musical theory. I also read books. I would spend the evenings and nights composing or walking through nighttime Vienna. Since I had little money, I only rarely went to a pub.

I haven't played on the street for a long time now although sometimes I would still like to. But too many people know me now and they would just stare, not listen. You need to be anonymous to play on the street.

How were you discovered?

One day in Vienna I was playing away with my eyes shut. When I opened them after a while, there standing in front of me was a man in a trench coat with a briefcase. He introduced himself as Willi Schlager from the record company CBS and handed me his card, with the words, "if you ever want to make a record, call me." And that's how I was "discovered".

When the Alpinkatzen began to purr...

Irrespective of the woods dying, apart from the secure pistes and climbs, constantly obliterating their traces, they lure the unsuspecting from the path with their purring. All traces are lost in the eternal ice. But from the deep sources of Austropop, gushes the refreshing LP Alpine Lawine, "with the strength of the earth" so to speak.

Die Alpinkatzen - Austria's answer to the yeti. The hottest duo since "price and worth".

Austrian folk music has survived many eras of history. And it will survive the Alpinkatzen too. But it will never be the same again!

Mentioned for the first time in official Viennese documents on 15th April 1955. Fourteen years later in diverse school bands for the first time with the amplifier on the electric circuit. At sixteen the hobby is already the job, tomcat Wolfgang goes among the professional musicians...

1981: Radical exit from the music scene. But the job in the audio industry brings the giro account more. However, in the long run, sitting on the bench by the stove is rather too boring for the tomcat, so he occupies himself with Afro-dance, forms of therapy, Italian football.

1986: new step onto the stage, which some months after the first solo gigs reach their hitherto peak in the second step. Together with Hubert von Goisern, the world now experiences the Alpinkatzen.

You must go back to 1952 to find the first entry under Hubert von Goisern in the Bad Ischl registry office's birth register. At the tender age of 13, Hubert is already playing the trumpet in the town's brass band as well as Sundays at church. At 15 years then comes the radical change: the electric guitar comes into the house and the sounds change too. Blues and jazz rock are discovered for his own work.

1975: Turns his back on the Salzkammergut. Off to Africa, finally Canada. Flamenco and harmony studies with Juan Tomas and Robert Edwards, as well as countless concerts.

1984: Back in the homeland, tomcat Hubert works as freelance musician and composer. Further study of electroacoustic and experimental music at the Hochschule für Musik, with Dieter Kaufmann. As well as musical direction of performance and dance theatre projects with Andrea Campianu, Elio Gervasi, Clyde Joyce and others. Compositions for string quartets, brass ensembles etc ... formation of Synthakus (ensemble for contemporary music) and solo concerts.

Pop music with a juicy portion of Austrian folk music. The sound of the "Styrian", harmonic and melodic structures of folk music, alpine dialect, lyrical reference to alpine themes ... for the Alpinkatzen they are spices, because our tables have been laden long enough with hamburgers, steaks and chips. It's time a tidy rump sets the tone.

The way it happened

Many years ago: Wolfgang Staribacher's international career lies in ruins. His accordion doesn't have the form of a balalaika. At this time, Hubert von Goisern is thrilling the Filipino mountain tribes with the double paschn (rhythmic clapping).

Two years ago: the pair meet on a traffic island in the first Viennese district and are discovered.

One year ago: The Alpinkatzen are travelling in north Italy as street musicians, are searched by the Carabinieri and made to pay a fine of 4000 Schillings (in national currency of course). From an unwillingness to pay, the spontaneous solidarity of the latent anarchist Italians, speaking choirs, a rocked police bus ... stop, because exactly that is one of the many Alpinkatzen stories. Yes, and those who want to hear it must endeavour to go to a concert.

Hubert von Goisern, from the original homeland of the poachers, from the Salzkammergut, and Wolfgang Staribacher, grandson of the beloved tramway creator of the Remise Erdberg.

Town and country, one of the many contradictions of the Alpinkatzen. "It's unimaginable that you two play music together," people said. But, too late! The first LP was already recorded...

The future of Austropop, I gather from a press release should be saved once again. Two men, who appear under the awful name Alpinkatzen, feel they have a mission as savers, and have just released their debut album Alpine Lawine. Actually this record goes beyond the boundaries of Austropop.

The Alpinkatzen consist of Hubert von Goisern and Wolfgang Staribacher, two nature boys with a predilection for the accordion. On this, they play for example Dolos by Mikis Theodorakis (in the alpine area, the song is best known under the title Ich hab' doe Liebe gesehn by Vicky Leandros).

It is funny to find this instrumental piece on an Austropop record, but there are still more unfamiliar things on this record. For example, the Christmas speech which the Chancellor of the time gave the Austrians in 1945: "I cannot give you anything, no candles for the Christmas tree, if you even have one, no bread, no coal for heat..." This speech is mixed with Es wird scho glei dumpa, together with the Alpinkatzen, the piece is called Nachkriegsweihnacht (Post-war Christmas).

Further, there are English rock songs, among others It's All Over Now and Cocaine, reggae and disco, a piece of Lehar (Gern hab' ich die Frau'n geküßt) and alpine songs. The title songs Alpine Lawine concerns itself with the avalanche that sweeps the mountain with "traditional costume in yodeller delusion".

Solide Alm is an ethnic recipe: roast seven rashers of bacon, an onion as well as mushrooms in coconut oil, plus a touch of sesame oil, stud a cauliflower with tamarind, whomever it isn't dawning on will never be an Alpinkatzen fan. What the offer is nothing other than a background description of Austria's culture, above all the false mountain-dweller ethnicity. The Theodorakis title is therefore on the record because the composer refused to do his duty in the Fascist regime.

Alpine Lawine is something to make a contribution, something success will hopefully not diminish too much. But the Bavarian group Haindling also found an enthusiastic audience here - and the Alpinkatzen are nothing but an Austrian version of Haindling. 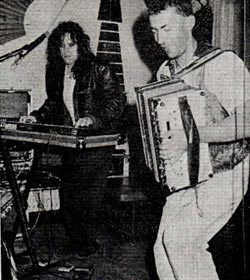 Weilheim. What the Alpinkatzen bring to the cabaret stage is not aprés ski party - and a connection to the mains is the minimum requirement if you want to enjoy their somewhat different folk songs. There is "power", but then they really get things moving: alpine melody-tradition are mercilessly lined with pounding synth sounds, folk music mixed with disco rhythms. And the most astounding thing about it: what comes out of the loudspeakers even sounds really good. They are now providing the proof - although evidently frustrated by the modest audience interest - in the Weilheim music local, Buddy's Inn (of which you should really take note as a live stage).

The repertoire of Alpine Cat Wolfgang Staribacher (keyboards, accordion, trombone and vocals) and Hubert von Goisern (Styrian accordion, guitar, flute, trumpet and vocals) from "root music from the Salzkammergut" to Stones clippings on the accordion.

They do not have reservations, they are also not needed. Even though it gets on your nerves that rhythm and effects come exclusively from a superbly programmed synthesizer, the Alpinkatzen carry complete musical conviction. In between times they even play original folk music at time - and we listeners have nothing against that.

As regards content with the Austrian duo of the new style, there is some pure jokiness, but above all in the second part of the programme they become really cabaret. It is about the dream of a high tech Heaven and about the German Deutschmark mentality.

They also come out with philosophical things: "It could be that long before the the money rolls in, the devil gets us." Good, witty lyrics are then at least the salvation when the music is a bit boring, the Alpinkatzen do that really skilfully. And so you leave the concert with the contented feeling of having experienced something really remarkable. And that is good somehow.

A timeless alpine saga - the mountain is calling! 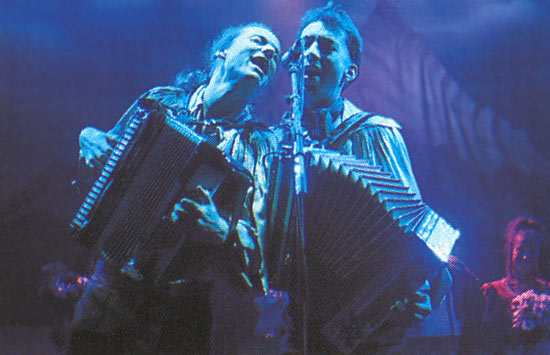 Thirty years ago, the shrill alpine show, the rustical from M.O. Tauchen with music by Wolfgang Ambros and lyrics by Josie Prokopetz was performed for the first time and has since then matured to a cult. 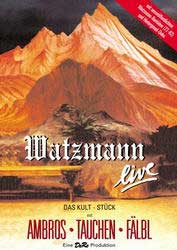 This first alpine musical tells the story of the cruel Watzmann mountain, which regularly calls the sons of the mountain farmers to it and lets them run into disaster, but this is really only the framework for loads of fun ... some figures, like the Gailtalerin for example, became cult figures a long time ago!

Apart from the actual rustical (rustic musical) Watzmann live (recording from the sensational tour in 91), a documentary about the origin of the Watzmann cult will be offered with rarities from the early years (1972 - 1982) believed to have been lost. With which one good joke or other, and naturally the at times dramatically atmospheric and at times rousing, swinging music between rock and folk dance - of course performed live (with Hubert von Goisern among others!), the piece reaches a high class of humour, without sinking to the level of beer tent humour.