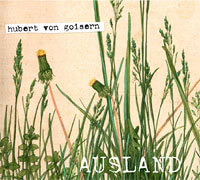 It all began in a moment of carelessness. It was late autumn 1999 in Salzburg, when I was finished with the recordings for Fön and asked the musicians present, Bernd Bechtloff, Burkhard Frauenlob and Arnulf Lindner, to hang around another week to record a few folk songs.

Some melodies had been haunting my head for a long time and I thought that I could drive them out with a short, painless production. For what holy water is to the devil, the studio is to folk music; one microphone is usually enough to kill off the desire to play music and sing.

The opposite happened. At the end of the recordings for Trad, instead of healed, I was more open than before to the songs and yodels of my ancestors and the continuation of the work (?) became inevitable. So at the beginning of 2003, high above Lake Hallstatt, Trad II came into being in the remote Krippenstein mountain hotel. This time, the Swiss guitarist Max Lässer was with us. A small tour in spring 2004, for which I was also able to win Monika Drasch, should have ended my folk song phase once and for all. The talk was of 30 concerts, but it became summer, yes, it became autumn and - we still played the length and breadth of the country. To the hundred concerts there will probably have been, as I struck up Wann i durchgeh for the very last time in Basel and sang the corresponding, melancholic yodel together with the audience.

I was often asked whether there would be a continuation of this programme, that is, a Trad III. Now in a certain way, one could say: here it is.

I thank all who were there; the visitors to our concerts and those who musically, technically as well as organisationally made it possible, or help shape it.

With Ausland HUBERT VON GOISERN presents a cross-section of the best titles from his enormously successful TRAD II tour through Germany, Austria and Switzerland the year before. There are also songs included, which were only to be found on the deleted Trad album. As a bonus, this combination of CD/DVD also includes a 45 minute DVD of the travel documentary about the festival in Timbuktu, with lots of music.