On Monday at the release party for the new live double album Im Jahr des Drachen (out on 21.06.13), there was more than one reason to celebrate. Hubert von Goisern and his band received another gold disc for the successful album Entwederundoder, this time marking 100,000 sales of the album in Germany. There was also a gold award for the album (Independent Music Companies Association) from IMPALA, as well as gold for the film Wia die Zeit vergeht!

Double platinum celebrations on the Dachstein 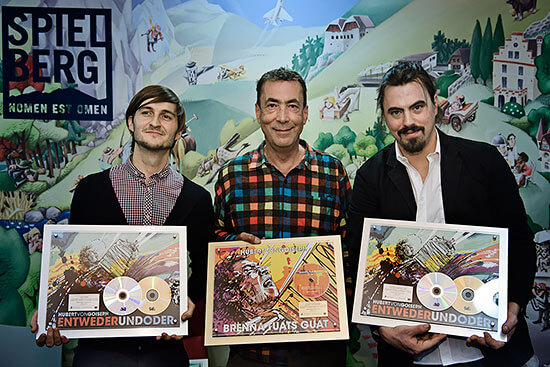 In recent months Hubert von Goisern's current album Entwederundoder and the accompanying single Brenna tuats guat have enjoyed both critical acclaim and chart success. At a celebration at the Red Bull Ring in Spielberg Hubert von Goisern was presented with two awards for the sales of these releases.

For the number one single Brenna tuats guat, which has sold 15000 copies in Austria, HvG received a gold disc. For Entwederundoder, which has been in the Austrian top ten for the past 13 weeks, Hubert von Goisern received a platinum disc for sale of 20,000 albums.

"This success is stunning and at the same time daunting"

Tips took the opportunity in Spielberg, Styria, to congratulate Hubert von Goisern on his gold and platinum awards for the new album EntwederUndOder and his single Brenna tuat's guat. The newly distinguished Upper Austrian explained how he deal with his big success and what he has planned for the new year. 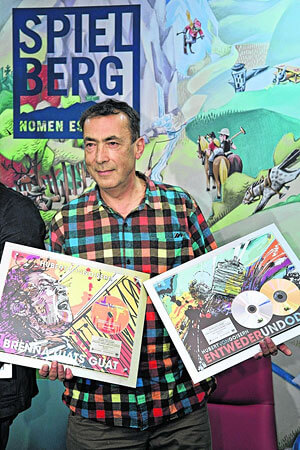 Congratulations on the gold and platinum awards for the new album and the gold disc for the single. Are things still burning?

Thanks. The music is what we're burning for, it is a great gift with which we were all born. It's great when success comes and the attention is as great as it is now.

When your new song is played, no matter whether it's on the radio, at Aprés Ski, or in the disco, everyone goes crazy and sings along. How does that feel?

It's stunning and daunting too. We haven't done anything different from what we've done all along - play music. I think the fact that the songs concerns us all plays a role. This song simply came out of me and it touched the nerve of the moment and said what many people were thinking.

Did you think that Brenna tuats guat would be the one to go down so well? Did you have a favourite song on the album before it was released?

Your new album as a whole has been awarded gold and platinum too...

Yes, that's the point exactly. Brenna tuats guat is just one of 12 new songs, just part of the clock face. The attention and award wouldn't have come if the other eleven songs weren't good.

The concert in the Posthof in Linz is sold out, your concert in Gmunden was sold out in nine days, am additional date was added, which sold out in a few hours. Had you imagined that happening?

No, I really can't believe it. But there are more dates at Burg Clam and a huge open air here at the Red Bull Ring in Spielberg. That will be the biggest concert of the 2012 tour. I have always given concerts in Germany and played music in recent years. Success in general isn't anything new for me. But I still run into people who say to me: it's such a shame that you stopped in 1994. They've not realised that I've kept making music.

How many concerts do you have planned for the new year?

We're planning 80 to 100 concerts for the new year, on average we'll be playing five days and then having a day off. We've never played at such a large scale in Austria. There will be room for 25,000 people at the Red Bull Ring in the summer.

Will the album form the main part of the concert, or will we hear old HvG favourites too?

We're playing about an hour of songs from the new album and then there's an hour and a half of music from the past. Music from the last 20 years, in particular the songs we like most..

How are you preparing for this intense years of concerts?

Our tour starts in Switzerland on 18th January, we'll start rehearsing on 4th January. Until then I'll be taking advent slowly and meeting up with lots of friends and taking the time to recharge my batteries, as I'll need the energy for next year. Until then I'll be staying low, because when things get going, there's no control any more. 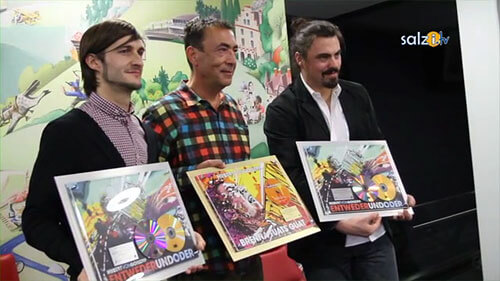 Heinz Nußbaumer, multi-award-winning author and journalist, put it like this: "For me Hubert von Goisern is the sole living representative of true world music in Austria". The reason for this declaration? A press conference in Spielberg, Styria, at which the Goisern spoke about past and planned projects, in particular his tour through Austria, Germany and Switzerland, which will be starting in January 2012. Around 80 media representatives from all over Austria made use of this rare opportunity and were not disappointed; together with the musicians in his band, Hubert von Goisern talked about the excitement and anticipation for the forthcoming 100 or so concerts. One expected highlight: 14th July 2012, when the Upper Austrian will give an open air concert in front of approximately 25,000 people at the Red Bull Ring - the biggest concert in his homeland next year in a unique setting. Of course the current single Brenna tuats guat will also be heard, a song that has so precisely touched the emotions of the listeners, that it has been awarded gold for sales of more than 15,000 in Austria. The accompanying album EntwederundOder was awarded gold and platinum status, which was celebrated in Spielberg after the press conference. A success that both delights and surprises Hubert von Goisern: "It's lovely to experience this recognition without having done anything different from before". Colleagues Klaus Doldinger and Philipp Poisel also added their congratulations via videoconferencing from Germany - as well as of course the aforementioned Heinz Nußbaumer. And the good fortune ensues: ticket sales for the tour have begun and some dates in Austria sold out in just a few hours. It burns well, for next year too!