Hubert von Goisern will be 50 years old on Sunday - no old age for a pop star,
if restlessness characterises life as well 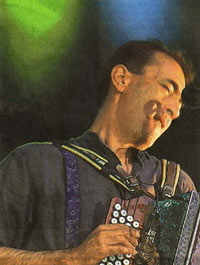 50 years is old. For a popstar, damned old even. Compared with about 1.8 million sold records and the frequency with which he fills concert halls, Hubert von Goisern is a pop star, who will be 50 this Sunday. But we have Mick Jagger. He will be 60 next year and is already involved in doing incredible things: he carries pop into retirement age. Not alone, because the age barrier for going onto the pop stage does not play a role any more, the Goiserer seems dangerously young in his native surroundings.

Hubert von Goisern does not stand still. A couple of weeks ago, the album Iwasig was released. In a few days a club tour begins. In the winter, the recording starts for Trad 2. He travels. He was just in Egypt, in order to settle concerts for 2003 with the superstar Mohamed Mounir at a musical exchange of ideas.

Goisern never searches, but always finds. "See what happens", he said in 1994 after the end of the Alpinkatzen in reply to the question about what he now wanted to do. That implies inner calmness and burning longing at the same time. It pressed him, the world traveller, more questions than he would ever answer. Fullness, comfort and laziness perhaps occur to him if it is about food, friends or a new sofa, but certainly not when it is about the shape or formation of life.

He is a resister. Whether he squeezes down the cultural folksy-stupidity with the accordion, or attacks the Home Secretary about the refugee politics, it makes no difference.

In Salzburg, which he chooses as his home town , in this city and in Austria, the weariness which seems morbidly addictive after comfortable protection and reacts oversensitively to analysis, must be especially noticeable to such a bloke.

As proof for his important role as lead he is looked upon rather more suspiciously at home in Austria than elsewhere,when travelling. When he plays music in Dakar, the Munich Circus Krone, or at an open air in Egypt, he simply does not have to explain his art from scratch each time against the background of overwhelming traditional folksiness and he does not see himself confronted with dangerous waste and left-wing intellectual prejudice, when he "confesses" to his love for his homeland and for what productively grows out of it. On stage each politically correct and socially engaged level is lost. There he is what he wants to be: a musician, actually no matter in which genre, no matter where.

Up there is then no emotional difference, whether Mick gives the audience Satisfaction or Hubert stamps a polka. If the music goes, it goes - no matter whether as an alpine-ethno-collage or a rumbling double, no matter whether into the heart, into the brain or the legs. This conscientiousness is a boundless consolation for the world, also the little one behind the seven mountains. However, success and admiration causes a funny weird feeling there. When a "typical" person, "one of us", achieves this - there is something odd going on there. And the normal things carry a lot of weight here in this country.

Because he does not like to come terms with that, the Goiserer will - hopefully - remain restless. Perhaps he also looks much younger than he will be on Sunday on account of his restlessness, his eternal curiosity and resistance. Congratulations, Hubert! For the round birthday too.