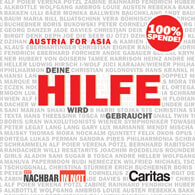 Vienna - Deine Hilfe wird gebraucht, the benefit song recorded by more than 70 native musicians for the benefit of the tsunami appeal, has raised 180,000 Euros from sales of the CD alone.

A total of around 390,000 Euros was collected in connection with this project for the support of the indigenous people of the Andaman and Nicobar Islands, as André Heller, to whose initiative the song traces back, announced at a press conference on Wednesday.

The "Austria for Asia" initiative was brought to life less than six months ago as a kind of "defence against fainting attacks", Heller says. A broad spectrum of Austrian musicians collaborated, for example STS, Georg Danzer, Rainhard Fendrich, EAV, Christina Stürmer and the Wiener Symphoniker. A number of artists, among them Hubert von Goisern, the Wiener Philharmoniker, the Philharmonia Schrammeln and Rebekka Bakken, have waived their fees.

The wave in the kitchen

When a pop song, no matter what quality, is played long enough, at some point comes the moment when it released an emotion or brings back a memory which burns itself into the collective memory. The same thing goes for pictures - more than ever in the time of the terrific power of television. The frequently repeated pictures of the attacks on the WTC produced anger and sorrow worldwide (and even a chart hit with Enya's Only Time, which the US broadcaster used for 9/11 reports). In the same way, the flood of pictures of the tsunami in southern Asia demands shock and a - also because the disaster met a tourist region - hitherto unknown zest for donations. Since yesterday, the wave of helpfulness has also been swashing out of the radio. The time had come on all stations on Friday at 8.40am. Austria für Asia sings Deine Hilfe wird gebraucht, the engagement from Austrian pop stars that became a song for the victims of the tsunami.

Help, no matter how it sounds

Now there should be no thought about musical quality (which benefit song, from Austria for Afrika to We Are The World or Band Aid was ever good?) or intensive thought about lyrics such as "Wo ist Gott? Hier regiert nur Tod" ("Where is God? Only death reigns here"). As initiator and lyricist André Heller said: "Everybody should buy this single, even if they don't like it." The thing is good, because they want to do good and because everyone who has a position or name and has ever recorded a son in this country has joined in. But why is Hubert von Goisern, the great traveller among the native musicians, missing? He has indeed made the song Dunkelblau available, but he is not to be heard in the benefit song.

Poorly off in Mali

It was dumb that the Goiserer was on a music trip in Mali on just the days of the recordings. There he sat at the ancient PC in the foyer of the Hotel Relais in Bamako and wondered. Daily he was confronted with emails in which he was pushed to find a way to find a means and a way to collaborate on the benefit single via an MP3 file from afar. The blindness in the worldwide benefit race must have blinded them to the realities of the world beyond our prosperity. For we'll tell you: Mali, Bamako, South Sahara - it's not total need and concern for existence that prevail there, but poverty and underdevelopment reign and above all, that's not the ideal place to record an MP3 file transported via email. The word "Hilfe" ("help") from the song title Deine Hilfe wird gebraucht stands in big red letters on the CD cover of the benefit single. You can't say any more, and no more should be hoped for.