Goisern's "revenge" on the ORF 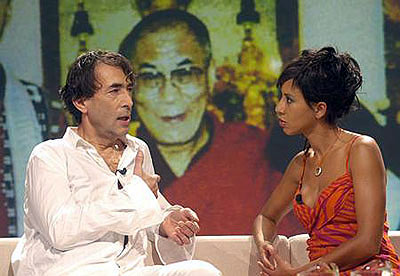 The advertised "Ultimate Austro Pop-Show" was most likely designed by the ORF as conscience settlement against the Austrian pop scene, where you can choose between the meanings forbidding, unmistakeable, drastic and emphatic for the term "ultimate". At the Amadeus Austrian Music Award 2001 ceremony, Hubert von Goisern was emphatic for the audience, when he criticised the meagre presence of Austrian artists in the ORF programmes with sharp words. In the TV broadcast of the gala, this criticism fell victim to editing, about which the Austrian musician quite rightly protested. In 2003, Hubert was nominated once more (for the CD Iwasig), but he chose to stay away from the gala, because nothing had changed with the programme politics by then.

Hubert von Goisern was successful in his revenge at the final of the Austro-Pop-show in the form of satisfaction and overwhelming joy when he took second place behind Rainhard Fendrich's hymn I Am From Austria with his beautiful and subtle ballad Heast as net and banished Falco's Rock Me Amadeus to third place. This time, the ORF censors had no chance of banishing Hubert von Goisern from the screen because the end result was decided only by telephone and SMS voting from the TV audience.

Bad Goisern congratulates freeman Hubert von Goisern on this extraordinary success and, for the future, wishes him great ambition, stability and powers of self-assertion with the realisation of his personal projects and musical goals. 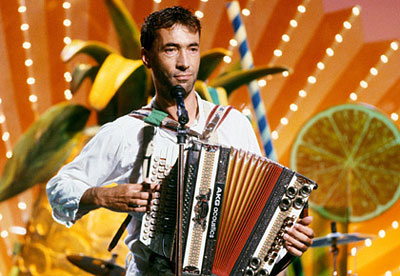 A decade and a half and 40 hits: Arabella Kiesbauer dedicated herself to the period from 1990 to present day in the third episode of the Austro-Pop-Show, which will be broadcast on Friday, 10th December 2004 at 21.15. It was the era of the technical revolution: the mobile phone mutated from status symbol to object of daily use, the DVD took over from the video cassette and terms like SMS and World Wide Web were suddenly on everybody's lips.

The nineties were also an optically revolutionary time: tattoos were presentable, piercings were almost a fashion must - and navel-baring tops were not just worn by the small percentage of the female population who could get away with it.

In the third part of her Austro-Pop-Show, Arabella Kiesbauer captures the hits and the life experiences of this era. The whole breadth of music made in Austria is to be heard, from E.A.V.'s Ding Dong from 1990, to Verena's Addiction from 2004. "Austropop lives, this show proves it quite clearly!" says Arabella. "The 40 music titles which will be presented on 10th December prove that the public likes and accepts Austrian pop music from Austrian artists, and above all in Austrian dialect. Of course I also chat with my guests in this episode about events which have almost been forgotten, and which we would like to remember."

Rapid's entry to the European Cup finale in 1996, Hermann Maier's triumphant rise to "Herminator" and his sensational comeback, the accidental death of the Austrian idol Falco, the worry about the "Millennium crash", the worldwide computer crash at the change of the century: there was plenty that has excited, inspired, moved or shocked the nation in the years since 1990. 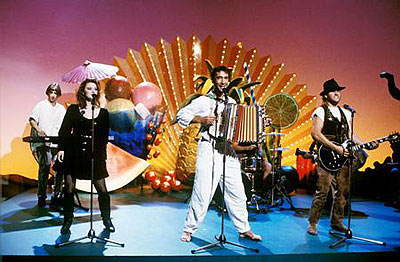 Four of the forty songs presented in the third episode will be heard again in the Austro-Pop-Show, in fact, in the grand finale on Friday, 17th December at 21.15 on ORF 1. Because in advance, a specialist jury of music and media experts was called upon to choose their favourites from the seventies, eighties and from 1990 to present day.

From this jury valuation, as well as sales and listening charts, the media echo caused by each song and the extent to which a title was a talking point and was able to embody itself in the collective consciousness as a hit, came the Top 10 of Austropop. These ten titles (three from the seventies, three from the eighties and four from 1990 to today) are in the grand finale for the public's vote. And the ORF audience alone decides which title has it in it to be the ultimate Austropop hit!