Music stays in the valley 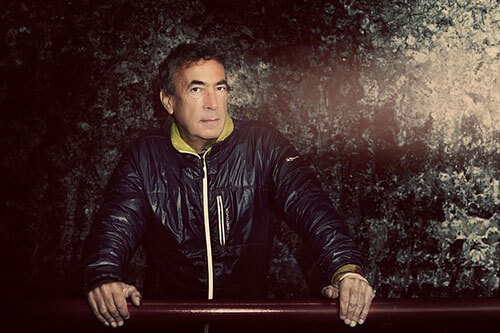 On the soundtrack of Austria, the mountains outside the window and the magical first encounter with Greenland.
Artist Hubert von Goisern on landscape, atmosphere and music.

For the film Oben und Unten (Above and Below), the Austria film from your old friend Joseph Vilsmaier, you viewed many mountains from above. How does one put mountains to music when one isn't looking up at them?

I was able to fall back on melodies that come from the alpine valleys. If I hadn't written them myself, then they came from old folk tunes or yodels that carry the mountains within them.

What does that mean? What is an alpine motif in music?

The classic internal jumps. The fifth, the octavo. And subsequently the third and fourth. The melodies move up and down along the triad. That's very alpine to me.

How do you create a soundtrack, technically speaking?

I watch the film, and something comes to me. A sound, an instrument, a melody. Then I sit at the piano, or pick up the guitar or the trumpet - and play along and see what that makes.

On what do you orient yourself?

You get a feeling for the colours in the image. Then I see to it that I stay in the same colour mood in the music. Or I think, that needs a complimentary colour in order to contrast the atmosphere of the image with a different weight.

That would be too simple. But of course in minor you think more of darker colours, blue too. If the film lingers in dark blue, I might think that now it needs a light to come into it.

You only agreed to set Oben und Unten to music after a long period of consideration.

Vilsmaier called me and said: "Please do the music for me." I said no three times. But then he persuaded me and I don't regret it at all. I saw the work as a great opportunity to deliver the soundtrack for our country.

Though you've basically been working on the soundtrack of our country for a long time already.

Sure, in a way. But perhaps it's a presumptuous if I say that of my own music.

Okay. But I am conscious that a number such as Heast as nit stands for our culture, our taste and smell, for our togetherness and opposition.

Is the alpine landscape intrinsically tied to folk music?

Isn't that a kitsch trap?

Of course. Oben und Unten only shows Austria's most beautiful side. Sepp Vilsmaier can film a dustbin and it'll start blossoming and you think: beautiful! It doesn't make it easy for an artist to suddenly get in with the dangerous and sharp.

How do you get on with the real mountains? When you chose your name, it was a statement of intent: I am a child of this alpine country. Is that still true? For your real life?

It's completely true. Even if I don't go into the mountains as much as I used too. That's down to my lack of fitness.

So the alpine has remained as culture for you and not as a close experience of nature any more?

Yes. But I don't think I could live without the alpine optic.

You need a mountain when you look out of the window?

What do you see when you look out of your window?

The Hoher Göll, the Untersberg of course. The Tennen Mountains. The Gaisberg. I built my house so that I'd be looking into the mountains. The lowlands are behind me.

Doesn't the presence of the mountains have something frightening about it too?

I know people who say that. My second wife, Kate, who came from Canada, didn't feel happy in the mountains. She certainly thought that the panorama was impressive and "awesome", but in the night, when there was bad weather and you couldn't see the mountains, she was afraid. Even when you don't see them: you feel the mountains. Personally, I find that super, but it's too much for a lot of people.

Because the mountains are bigger than us.

Is it only the mountains that have this monumental presence for you?

No. The ocean is monumental. Great river landscapes have something eternal about them and simply assign us to the place we really live. The natural world doesn't let us inflate ourselves and make ourselves out to be unbelievably important.

You seek out such places. You've travelled up and down the Danube to play music with the locals. Is music the only attraction, or are you looking for your place in the landscape?

I'm a curious place and I like putting myself in a new context. Be that the river landscape of the Danube, or the American landscape, where I'll be going on tour this year. Or when I go to Africa, which I've done every now and again. But only the mountains are familiar to me.

Is that also why you went to Greenland? To put yourself in a new context?

Yes. Greenland was almost the coolest landscapes I've ever experienced. I think I look for surroundings that aren't created by man, but which have this untouched, illustrious quality. Greenland offers that to the n-th power.

What impressed you so much?

The first encounter was magical. I've been to Greenland four times now and I was able to adjust to the monumentality of the landscape a little. On my last visit I didn't feel as small as I did the first time.

Could living in such surroundings appeal to you?

It certainly earns my great respect, seeing how people manage in such a barren surroundings. But that goes for life in the mountains here in Austria too. Anyone building their house in isolation needs courage. You can enjoy the beauty of nature, but you need to be able to withstand its threats too.

In reality the old, exposed settlements have been deserted.

It really depressed me to see in Greenland how critical things are for the next generation. When you know that many generations of people have lived here, but now it's now longer working out.

When you look at the monumental landscape of Greenland, do you hear music? Do the images automatically combine into a soundtrack in your head?

I don't hear my own music. I hear the music that's there, even if it's not making a sound at that point. I lived in Canada for a long time and listened to a bit of the Inuit music from the Northwest Territories and Yukon. It's this throat singing, where three, four women sing together - as well as against each other. I hear that.

You yourself make music that is on the border between romanticisation and reality. Thinking about the video to Heast as nit: you can't get much more romanticised than that. And nonetheless everything is unbelievably beautiful: landscape, atmosphere, music. Do you sometimes think: I've gone too far?

No, I've never thought that.

Mostly I think that I'm off target. That's how it was for example with Brenna tuats guat. I thought: that could have been a really cool song, but the lyrics have such breaks, it won't work as a real hit. And when it did become a hit, the song complained at me like a kid: You thought I was no good! But I've shown you!

Do you hear the song differently today?

Yes. When I hear it now, I think: amazing, what a success.

Is that how it was with your biggest hit too, Hiatamadl?

When it came to Hiatamadl I thought: that could really be a hit. But if it does become a hit, then I've got a problem.

Because I don't want to become famous with music like that. And then that's how it was. Heast as nit was on the same CD as Hiatamadl, but was never played on the radio. Do you know when Heast as nit was first in the charts?

Really? For what reason?

Downloads. Brenna tuats guat shot through the roof and people busied themselves with my early work and downloaded Heast as nit on droves. That's how the song charted for the first time.

At the same time it's probably the song with which you are most associated?

When you go up a mountain nowadays: do you express your joy? Do you call out, or yodel?

There are no acoustics on the summit. When you're right at the top, there's nothing that reflects your voice. You can call down, but not much more than a thin little voice gets down there. I don't need to go into the mountains for the optimum echo. It's enough to go through Michael's Gate in Vienna with its fantastic dome.

Where yodelling sounds better than on the summit?

Definitely. Fergus Fleming described it in his book Killing Dragons. There's the scene in which the Englanders climb Montblanc and sing God Save The King on the summit. Afterwards they swore never to tell anyone how lousy it sounded.

You don't have your best ideas on the summit?

I have no ideas at all on the summit. I experience the sound of the wind and the silence as a complete composition. Anything I did there would interfere. The best thoughts come to me in urban areas, where it's already loud. That's when I think: I can go one better.

Keep quiet on the summit, sing in the valley?

Music is better staying in the valley.