A late love of books

What brings people to reading? Why do they occupy themselves with novels, poems, stories and nonfiction? Hubert von Goisern tells how he became a reader and reveals his favourite reading matter. 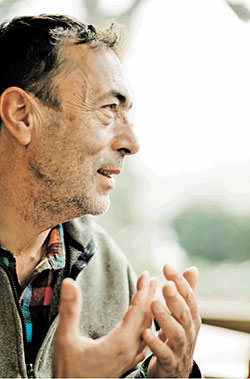 Hubert von Goisern came late to books. The classic assertion that those who don't find their way to books in their youth are lost to literature doesn't apply to him. "This desire for reading wasn't something that was conveyed at school, neither was it at home, there wasn't much reading done there. It actually wasn't until I was 27 that I really began to read. The love of my life at that time read a great deal and I wanted to know what she found so fascinating about books. After she disappeared from my life there were still few books of hers lying around, which I then read. That was rather a turning point."

He had his first reading experiences in English because he was in Canada at this time and had a better command of English than German. He was surrounded by people who shaped and furthered his vocabulary. After his return to Austria he had to adjust his German to common usage. "My first book that really went "ping" was John Fowles, The Magus, then came Lord of the Flies by William Golding. I even started reading Hesse in English."

At the age of 27 Hubert von Goisern decided to become a musician, at 30 he saw himself as such. At first he attributed no significance to writing lyrics: "I occupied myself solely with music, lyrics weren't important to me. I was of the opinion that the lyrics distracted from the greatness that the music has. The opportunity to bring in your own fantasy dwindles with lyrics. Lyrics didn't come until much later. I have no role models for dealing with lyric content. Though: André Heller was a big influence. His way of poetically express himself inspired me and the linguistic freedom he took. Wolfgang Ambros's lyrics didn't speak to me especially, but it was the way used colloquial language. When I sing High German it gets a pathos that I find unpleasant. I don't feel that in colloquial language. English, even when you can speak it very well, is a bit further from the heart."

Writing lyrics is a laborious process: "When I write a song the music is always the first. I write lyrics for my music and don't set my lyrics to music. When I have a composition ready, I know what the song is about. Then I look for the words and it's like solving a difficult sudoku. I'm not prepared to change a melody I've come across in order to make a word singable. It happens that you can't use an "i" at a certain point because it's a sound that you can't sing with an "i". Then I need a word that has an "e" or an "a". I look for exposed melody points, where vowels fit and then I build the lyrics around these vowels. It would be a thousand times easier to write the lyrics first, I've often been cross about it."

Egon Friedell: A Cultural History of the Modern Age. The crisis of the European soul from the black plague to world war.
Hubert von Goisern knows that Egon Friedell isn't to be fully trusted as a cultural historian, especially since he tends to fib. He doesn't use serious historical methods, but relies on his fantasies when facts are lean and documents are scarce. "This is how history could have been", says von Goisern, stressing that it's about Friedell's subjective variants of great events. Friedell has a command of a fine feel for punchlines and thanks to his stylistic brilliance also knows how to grab the reader for long stretches. Curiosity is constantly kept alive.

John Iliffe: The History of Africa.
It's difficult to find something comparable. John Iliffe, Africanist in Cambridge, ventures to tackle the enormous task of writing a history of Africa that reaches from the beginnings of man to the end of apartheid. Iliffe opposes the notion that only what is passed on in writing is historic. He presents an opposing history to the Europe-heavy image of Africa and paints the Africans themselves as being historically impactful inhabitants of a continent often hostile to life. So you don't meet wild people that are civilised through colonisation, but rather you encounter a rich fund of ancient cultures.

Benjamin Lee Whorf: Language, Thought, and Reality. Metalinguistics and language philosophy.
The idea that our thoughts are ruled by language has been enormously fascinating to Hubert von Goisern. You have to envisage, he says, "that when someone speaks another language, which is built differently, has a different syntax and other tenses too, it entails a completely different way of thinking." It must be recognised as an enormous chance too. It is a significant resource that in each case has different approaches to problems and different attempts to solve them. The American linguist Benjamin Lee Whorf came to his theory through the study of the Native American languages.

Ngugi wa Thiong'o: Wizard of the crow.
Ngugi wa Thiong'o had a difficult position in Kenya with his critical literature. He was arrested in 1977 and was not freed until Amnesty International intervened. He now lives in the USA, but Africa still grips him to the marrow. His most recent novel Wizard of the Crow deals with current conditions in an easygoing satirical manner. The ruler of the Free Republic of Aburiria, a despot, is trying to achieve international standing with the construction of a gigantic monument. Ngugi wa Thiong'o combines the African oral storytelling tradition with western literary forms of expression into a powerful novel about post-colonial life.

Harald Weinrich: Lethe. The art and critique of forgetting.
This book has engaged Hubert von Goisern many times over the years. It touches on something close to him. No wonder, as for Harald Weinrich forgetting is a prerequisite for creativity. How is someone who doesn't cast off their role models to create their own art? There is a constant accumulation of knowledge, says Hubert von Goisern, so it is just as important to be able to forget things in order to make room for something else. Harald Weinrich works as a literary academic and linguist, who does without academic jargon and understands the art of the gripping explanation of tricky connections.

Kurt Vonnegut: The powder blue dragon.
Kurt Vonnegut is important for Hubert von Goisern, because he he embodies for him a kind of author who shows that the USA is not yet lost. There are a few people who "don't just drive across other countries" with imperialistic self-assurance, but like Vonnegut joke about the American mentality and way of life. Which of his books should one read? Perhaps this volume, in which Vonnegut reminisces about his experiences as a prisoner of war in Germany, when he experienced the bombing of Dresden. These observations decisively shaped the author's world of view.