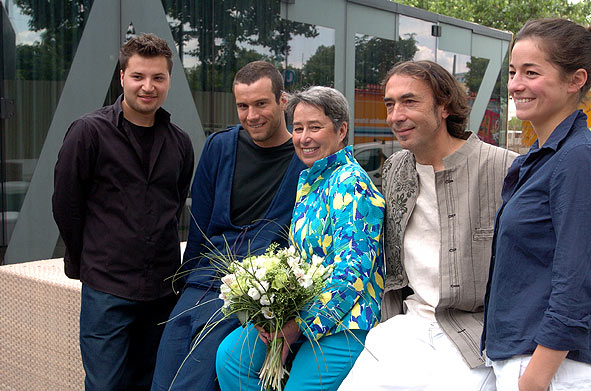 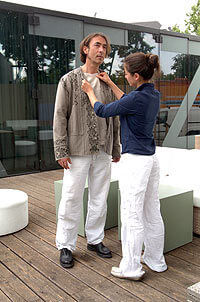 Aspect: Durability, tradition
Sophie Pollak for Hubert von Goisern
Article of clothing: Jacket
Material: Cotton
Realisation: A simple cut, following Chinese work clothes, grey cotton with thin black stripes, some edges open, some closed. The seams are joined with an embroidery stitch typical to the region in order to make a reference to handwork and tradition. The motifs were applied by hand with help from old wallpaper rollers. The motifs are flowers and small - following traditional costume - blossom tendrils. Finally, the piece was embroidered with wool.

Hubert von Goisern:
"Between Trend & Tradition: Adopting a position via the garment!"

"It's not about re-inventing the wheel, but rather giving it the direction in which it should roll. The question isn't: which style, but: does it have style?

For me, the examination of traditions and the testing of their suitability for the present belongs to this just as much as the passion in the collaborative formation of this world.

And: clothes are always casing, protection and shield, advertisement or camouflage, a game with your own and collective identity. I adopt a position via the garment, ideally a self-confident and open, dynamic position."

"I want to put tradition and handwork in a fashion context," is the concern of Sophie Pollak from Vienna. For the printing of the pattern on her cotton jacket for Hubert von Goisern, she went back to an old painting technique. She found the tool for it in a painter's archive: a wallpaper roller.

Dreaming about the globe and getting involved...

Of home and travelling, time, child-rearing and fashion and what that perhaps has to do with sustainability - or not - Monica Lieschke spoke with Hubert von Goisern at the FORUM press event: "Fashion with future".

How do you "approach" you numerous journeys, how do you plan them, how do you look for your destinations or - to put it another way - what leads you there?

Life is a path - putting one step before the other - and the way mostly results in the movement which one is always in. However I sometimes also "impose" a period on myself - like right now - where I say to myself: "Stop, no more tours now - sit quietly, sit down, stare into space", ... let the ideas come and then set objectives again too. But you can't completely separate the aims for the future from the past: you read something, discover something, hear music and think: "hey, I can dream about the globe too, look at the map ... what countries are there? What bay, where perhaps no road leads to yet ... ? Really I rather look for the blank spots and not so much the beaten paths, whereby "blank spots" means something different to each person.

Are your destinations also controlled by your interest for the music there?

The music plays a big role, but not just that. It's perhaps rather the special feeling of being alive in a cultural area, of which I have heard something, which appeals to me and which I want know what it feels like. I like to travel to where it's different from home. I am not someone who looks for similarities, but rather the variety in order to reflect on myself. You can do that best when you move out of the circle in which you normally move, in order to then be able to look at your own traditions and doings.

"Homeland is also the place where I get involved"

In contrast, what is "being at home" for you, or "homeland"? Do you use this somewhat delicate term?

I don't actually use the term "homeland", but I am required again and again to concern myself with it, and I've had to think a lot about it in the last twenty years because the music I play is very regionally-oriented and the term automatically creeps in.

And so what does homeland mean for you?

Homeland has two meanings for me. One is a feeling of being at home. That can also develop where I didn't grow up - at least for me. Homeland is, for different people, varyingly big, varyingly small.

I grew up in a world in which you can go anywhere relatively simply and quickly, and through that in some way I feel "at home" all over the world. Because: homeland is also a memory: coming back to a place where I have been before, where I have friends, that doesn't necessarily have to be my birthtown of Goisern, or my hometown of Salzburg.
Homeland is also the place where I get involved and not where I feel like a guest, where things "don't concern" me and I don't have the right to express myself. Homeland is also always the feeling that something concerns me, I get involved, I remark on things I don't like and change them too if it's within my power.

What role does the time you spend in a place play in this? Time to acquaint yourself with the people, the situation, the culture?

You can get involved immediately. There are of course things which need longer, but you can also always get involved in the here and now - instead of withdrawing to the role of guest. But it's not enough to "sting" a little and say: "looks like you're all done with it." You must also have an affection and love for the place, for the people, in order to chip in.

"Everyone has their own rhythm..." 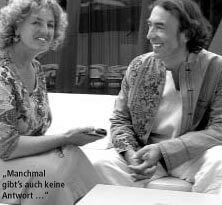 Yes, certainly. But of course there's no sense in decelerating so that things stay as they are or as they were. There is also the approach from many conservative people, who would like the wheel to turn but not move on further. That's just as wrong as a constant acceleration. Apart from that, everyone has their own rhythm which you should also take into consideration, just because one is faster or slower ...

Time is certainly the greatest luxury for me: taking the time to think about a question before you open your mouth. Since I noticed that I can presume to do that, I consider it an unbelievable privilege. I sometimes also allow myself to give no answer to the many questions there are. When the question is indeed interesting, but nothing intelligent occurs to me, I must first think about it. Sometimes the answer doesn't come to me until two days later. A bit more sitting back is good for me and would also be good for the rest of our bustling and frenzied world.

Do you also see this trend of unification, which you have mentioned, in music, for example, in the so-called world music or fashion?

What is frequently called world music has partly become a music from all over the world, but this hype seems already exceeded. It was always the case with trends that everyone jumps at, because it creates such a feeling of community, where you say to yourself, you want to belong: "Yes, I am a world citizen and play world music." And then there are others who quite decidedly follow a strict traditional line, whether it's traditional clothing or music. That's a feeling of being alive for them too. Thank God there's more than one groove.

As far as traditional clothing is concerned: I have the feeling that what I have on at the moment (note: pupils from the Vienna/Hetzendorf fashion school had clothed HvG sustainably as part of the project "Fashion with Future") is basically wonderful proof that you can build on elements of a tradition, and develop and use this further, deal with it. But you shouldn't elevate it to a religion.

Are there other aspects, apart from your music, your career, your "garb", where you try to live sustainably?

What occurs to me first is the requirement I have of myself to be an example for my children - one that also leaves space for other things, which I perhaps wouldn't even think of, which I perhaps sometimes even dismiss. To convey to my children that you should live your own dreams and ideas and notions, without the others who aren't that way becoming the concept of the enemy for me ... That you can be in a collective without constantly having to acting collectively. Because I think that the collective, when it is only collective, quickly becomes a mob. And then the individual spiritual resources that the people have, and which we need in order to deal with challenges of life, of nature, are lost.