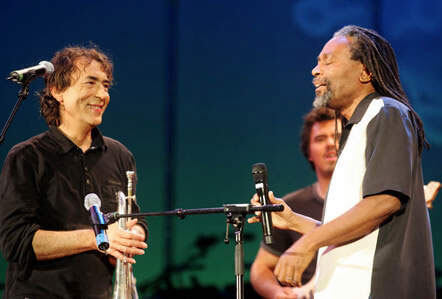 On 11th May 2007 Hubert von Goisern presented the Opening Ceremony of the Wiener Festwochen, welcoming the thousands of spectators in the Rathausplatz in Vienna and the TV viewers at home. Together with his new band HvG also performed three songs. For the Kohler yodel they were joined by the evening's special guest Bobby McFerrin, who improvised with Hubert and added his own vocal acrobatics to the performance.

Yodelling with Hubert and Bobby 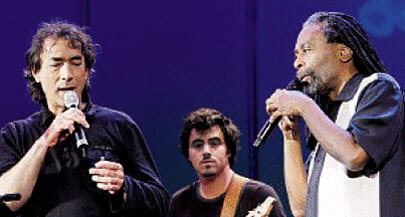 The power of art to unite people is the motto this year for the Wiener Festwochen. Aside from world musicians such as Bobby McFerrin, Hubert von Goisern and Joe Zawinul stood 220 young dancers on the stage for the start.

The warm temperatures drew more than 40,000 people to the Rathaus. An hour before the start the square was already well-filled, with the buses shovelling ever more people onto the square. They came from all corners of the world, so you could have met visitors from Australia, California and Japan among others. Many had come especially to see Bobby McFerrin. Such as Viktoria and Olivia, two young girls, who had been waiting for their star in front row since 6pm. And Hubert von Goisern? "Yes, we're here for him too." He presented the evening and also had the honour of performing with Bobby McFerrin. The pair yodelled and sang together, to the great delight of the enthusiastic crowd, which reached back as far as the Burgtheater.

Hubert von Goisern on the Festwochen

On the occasion of the Wiener Festwochen Opening Ceremony, at which Hubert von Goisern will not only be playing, but also presenting, the artist spoke to ÖSTERREICH about yodelling with Bobby McFerrin, his stage ship tour, the opportunities of integration - and the inclination towards being bad.

You're singing tonight with Bobby McFerrin, what will it be?

We're singing a yodel from the Salzkammergut. I'm really happy that he's collaborating and has found an approach to it. Although I thought he would, because he can definitely do something vocally with this kind of vocal acrobatics.

What is the approach one should take to yodelling?

It's simply a form of employing your voice. And you need to have the desire to try things out with your voice, fathoming them out. Yodelling is a form of that, which has been cultivated over the generations here. But not just here, there are pigmies in Africa for example who yodel, in East Tibet, the Sami people in Lappland, and in the South Pacific there's an island where they yodel.

Yodelling is difficult enough, but there's an African dialect of clicks, which it is said Europeans cannot imitate. Can you do it?

I can fake it, but not perfectly. But there's nothing you can't learn.

No, nothing. Of course there are people who have talents, which they can take to the highest level. But that doesn't mean that people without this talent can't learn it as well.

Do you have a talent for presenting?

But you're doing it today.

I'm doing it today, but I hadn't thought about it because I was so excited about the prospect of working together with Bobby McFerrin. I've been regretting it a little in the meantime. But it's not as if I can't present. I can present my own shows. I'm used to that and in that case I have 2-3 hours of concert in which to to span a range of anticipation. Apart from that, I'm used to sometimes being a bit nasty in my presenting. And I can't do that here, it's inappropriate, it's not my audience. So it's a bit difficult for me to be sweet and nice. Or at least only sweet and nice.

What do you admire about Bobby McFerrin?

His extraordinary musicality, which finds such a direct expression in his voice, which comes out so unfiltered. And the flexibility in his voice and the precision with which he meets the sounds. It all such a joy for life. He's not nasty at all.

So he doesn't suit you at all.

He does, because I don't like to be nasty. But when you're telling stories, fairy tales for example...

Precisely! And with only nice things, that gets dull, that's boring and it all becomes unpleasant for a reason other than wickedness.

[Read the "Linz Europe Tour" portion of the interview]

Reverential yodelling in the Danube delta

Today, Friday, Hubert von Goisern will be opening the Wiener Festwochen.
From June he will be playing music along the Danube for two summers.

[...] Hubert von Goisern regards the invitation to open the Wiener Festwochen live on Friday in the Wiener Rathausplatz (and live on ORF 2) with mixed feelings. He will be appearing as both presenter and musician together with Bobby McFerrin and Joe Zawinul during a glittering evening of entertainment. The mixed feelings certainly have something to do with fear. On the other hand you grow with the assignment.

Hubert von Goisern: "I've absolutely no idea how it's going to be. Like most other people I've always been concerned about security and don't like to let myself be knocked down on unknown streets and paths. On the other hand I always get involved in such incalculable demands out of pure defiance. To begin with I have always loved improvising and only trust band rehearsals with a degree of reservation. Secondly, potential failure in art is always a great temptation. You can't force anything! And from what I've seen of the director's plan, apart from singing three songs, I only have to come up with four things to say after I've done up my accordion."

[...] "McFerrin has always wanted to yodel and of course it will be a great honour for me if I can fulfil his wish. Apart from that I very much like his similar attitude, not wanting to plan so much and preferring to see what happens live. Since McFerrin is not flying in until the evening before, I am simply giving him a choice of three yodels. And we'll see what happens."