"We can put together better football than you"

Hubert Achleitner named himself after his hometown in Upper Austria. As Hubert von Goisern he became famous with alpine rock. The musician is a football fan and is hoping today for a victory over Germany. 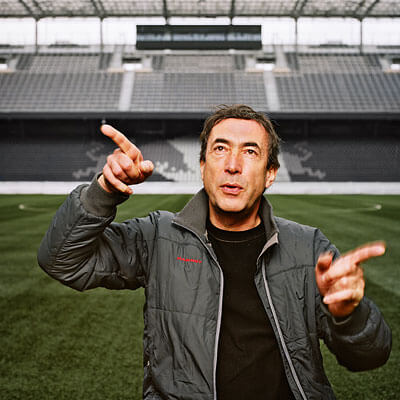 Mr Achleitner, the question that occupies Austrians and Germans today: how will the game go?

Anything is possible, as we saw on Thursday: who would have expected such a play from the Germans? I'm doing my Linz Europe tour at the moment and went to the east on a ship with my band last year. Two weeks ago I was in Offenbach and a journalist came along and said: "I can understand this idea of bringing people together in the east. But there's no need for such action going west." I said: "Wait and see, it might be even more necessary once we've eliminated you from the group." They didn't think that was at all funny.

For months now in your country your compatriots have been conjuring up the "Miracle of Vienna".

Perhaps they're doing that too often. Surprises should be surprises and can't be planned.

Will you be in the stadium?

I have a ticket. I didn't know that it's so dramatic. A friend called me and said that he had a ticket for the game in Vienna and asked "Do you want to go?" Of course I said yes. I'm going with my German manager and we've promised each other that we'll still talk to each other afterwards, no matter the outcome.

Are you a football fan?

Yes, I'm a fan of sport in general. I find football very interesting as a collective sport. It's a bit like a band, where you have to mobilise this common spirit.

Is the situation on the ship a bit like a long training camp, where people sometimes get on each other's nerves too?

Of course there are conflicts now and again. But because nobody can leave it always has to be solved. That's much better than having smouldering conflicts. We're a group of 26 people on board and everyone finds a counterpart to their craziness and what they have going on.

Did you play football at school in Bad Goisern?

With Jörg Haider, who grew up there too?

No, he's two or three years older than me and means worlds apart at school. I've never met him personally. Not that I can remember anyway.

Haider has also spoken as governor of Carinthia during the tournament. The population in Klagenfurt seems to be afraid of the Euro 2008 tourists.

I haven't been down there, so I don't know how the Carinthians are handling it. But not all Carinthians are stupid. But it's quite clear: when you have someone like Haider, who as governor is opinion-forming and who spreads such xenophobia, it's going to stick in heads somewhere. And they'll believe that anyone who isn't a Carinthian is a threat. I can readily imagine that. I have some very good friends in Carinthia and know that they are having a very hard time with the situation the way it is.

Tradesmen in Vienna are complaining that they still have to open their stalls at 9am even though nobody is coming.

I must honestly say that in this case I'm all for civil disobedience. I think it's silly to bow to these regulations. Of course you have to say, yes, there are agreements that were signed, otherwise we wouldn't have had the Euro. When civil disobedience is carried out as a collective then the powers that be can't do anything about it.

During the Euro 2008 the song Rotz & Wasser from your new album S'Nix can be downloaded free from your homepage. In this song you set to music the legendary radio report from Heribert Meisel, who commentates on the memorable 7:5 win for the Austrians against Switzerland in the World Cup quarter final in 1954. What is it about Meisel that fascinates you?

He was a great entertainer. When I finished Rotz & Wasser I did some research on him in the internet and read one of his books. You have to imagine: Meisel was invited to a conference and commentated there on a fictitious game. He wrote that the worst thing was having to commentate on a game right next to the spectators who said to him: "What you're saying isn't happening at all." And when he commentated on the game as it really was, it was too dull for the listeners at home. He was a very empathetic reporter. There was a legendary game, that must have been so abysmal that he told his listeners that they should switch off their radios, or listen to something else. He was damned to watching the game for the full 90 minutes. He commentated on a game - I think it was even against Germany - where he so celebrated a goal against Austria that he received threatening letters and was even threatened with dismissal. He didn't understand it, because he lived for the sport. I think this respect for the performances of others is super.

Was it cabaret, or did Meisel take it from the moment?

He knew what worked and how it worked. He had to learn it all and really got it down to a fine art. He had formulae too. Certain things you have to practise, you can't say them so fast. He outplays a Swiss, he outplays two Swiss, he outplays three Swiss. Say that as fast as he says it. It's amazing. He must have practised a long time.

His statement "we don't take it all so seriously" seems to be the attitude for Austrian football.

History has sent us through all the bottlenecks. But the fun stops with skiing. We get serious where we're good.

Is Sieger the club anthem for Red Bull Salzburg?

Almost, the form that is now on the record is not the anthem. The lyrics that are in between are new. We produced it as an anthem in a way that would sound good on the system in the stadium. As a track on the CD something was missing. Mr Mateschitz (head of Red Bull) didn't want any words, which I was pleased about as I didn't have the approach to it at that point in time. I thought that victory and defeat should be present when I wrote lyrics.

It says in the song that you see yourself when you look into the eyes of your opponent.

I think you can only conquer yourself. When you perform better than you ever have before, then you have won. If there is someone who is better, then he's better. The contest is first and foremost with oneself. In football games are won not just with technique but with the mind. That's where our chance lies today too. Of course we don't have such good footballers as the Germans. But that doesn't mean we're not strong in mind and fit to put together better football than you and to beat you.

Despite your anthem Red Bull Salzburg were also an example last season of a favourite stumbling.

Exactly. They have an unbelievable squad and didn't manage to make it to champion a second time. You have to want it too and do something for it. And then come things for which you haven't trained. They just happen. Where you suddenly come into contact with the ball in such a way that it finds its way into the goal.

You live in Salzburg, do you know the players from Red Bull?

No, I have no personal contact with footballers. I'm interested in talking to sportspeople when they have a certain maturity and no longer see their sport as the most important. I think it's very sad how little sportsmen and women witness beyond the playing field.