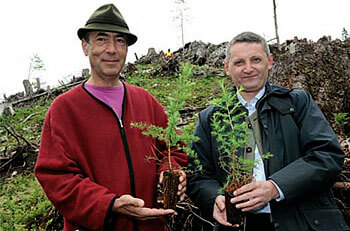 Following the effects of the storms Kyrill, Paula and Emma in 2007 and 2008 Austrian Federal Forests are this year beginning the largest reforestation campaign for years. "Climate change and the most recent winds have not been without consequence for the Austrian woodland. Forests need to be re-established in a large part of the country", explained Georg Erlacher, Austrian Federal Forests' Director for Forestry and Conservation. "Reforestation has continually increased in previous years. This year we have reached a peak: a hundred forestry workers are currently in the process of planting out about 4 million saplings all across Austria." That is an area of around 2000 hectares. "This is the only way we can guarantee that we preserve the forest for future generations and ensure the use thereof for the forthcoming decades," the spokesman said.

In total 32 different species of tree will be planted, including fir, maple, Douglas fir and alder. The rich mixture of trees will both increase the variety of species and strengthen the forest eco system. "The seeds come from our own seed processing station in Arndorf, Lower Austria," the spokesman revealed. "Very in tune with the idea of sustainability," Erlacher says, "trees grown from seed will only be planted in the area from where the seed was first taken."

The campaign is being supported by a celebrity in each Austrian province: for reforestation in Upper Austria it is musician Hubert von Goisern taking up the green service. He will be taking part in the reforestation on the Raschberg mountain in Bad Goisern on the 28th May.