"Music that can't be pigeonholed"

Hubert von Goisern has been playing European stages for a quarter of a century. As an innovator of folk music, someone who dusts things off, an individualist. And always as himself. Hubert von Goisern has never done what is expected of him and has been very successful in so doing. Musically-speaking, many assign him to "New Folk Music"; the more common descriptor of his style is "alpine rock" - many consider him to be the founder of this genre.

Under the heading "music that can't be pigeonholed", Hubert von Goisern will be talking to the former culture editor of the Kleine Zeitung, Frido Hütter, about traditions, ideologies and cultural borders, and the consolidation and crossing thereof. He'll also be looking at the field of conflict between world music and folk music. The noted music and film expert Hütter won't be leading the interview alone though - the audience is invited to enrich the conversation and join the conversation.

In a personal interview with journalist Frido Hütter, the multitalented musician fascinated the audience at Greith-Haus 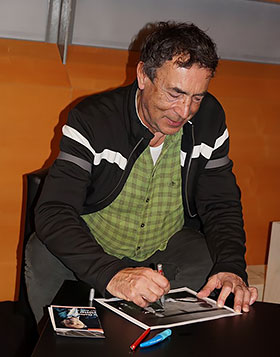 ST. URICH IM GREITH. There was a crowd in the venerable Greith Haus, where the team under the sadly injured manager Corinna Löw had organised a discussion of a special kind. Under the title "Music that can't be pigeonholed" Graz journalist Frido Hütter welcomed music rebel Hubert von Goisern to an interview. Even local matador Gerhard Roth and the former provincial governor Franz Voves, as well as Mayor Franz Silly made sure not to miss this box office draw to culture in the outskirts.

Brenna tuats guat - this video clip formed the introduction and finally you were sitting opposite a musical rebel. "Everyone understood the song, even people at the bank said behind their hands: "You're right ...", smiled Hubert Achleitner, as the musician from Bad Goisern is really called.

Left-handed and a chemistry laboratory assistant

There were many personal details to be learned about the exceptional musician from the Salzkammergut, who turned to music at the age of 27 and after training as a chemistry laboratory assistant and other various career attempts, fully committed himself to music at the age of 30. "If I'm an artist, I want to be one 100%", said Achleitner, who told stories of finding himself in various dangerous situations as a chemistry laboratory assistant.

At the beginning of the 70s Achleitner emigrated to South Africa and became acquainted with the music of different cultures. He attempted to bring together opposing clans with music at various little festivals. Bringing people together was then the intention behind the ship project that he put together with help from his friend Didi Mateschitz, even though he was reproached by him for "not being a Styrian".

Having earlier dismissed folk music as abnormal and old-fashioned, Achleitner later found his calling in this music, as during his travels around the world he learned to appreciate each folk cultural rooting in musical form. Including the joiking of the indigenous people of Lappland, to whom he even tried to return the favour in the form of a yodel. "Every Sami boy and girl are given their own "joik" at birth", explained Achleitner, who is delighted by this kind of yodelling as the most personal form of expression.

André Heller gave him his approach and enthusiasm for songs sung in dialect, someone the musician from the Salzkammergut greatly admires. And thus with Hiatamadl the first earworm of a very different kind went over the air.

Hubert von Goisern is left-handed, but is still more than a master of the Styrian accordion, having first criss-crossed the land with his guitar. "My father even managed to retrain me. I grew up in a time when being left-handed was no good," said Hubert Achleitner, who remembers the many bent nails in the course of being a DIY handyman with his father.

A tender Filipino song was the sensitive end to an intense evening with Hubert von Goisern, who is incidentally a self-confessed fan of Schilcher.