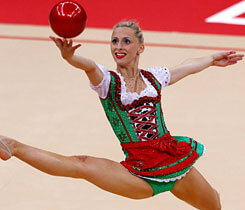 At the 30th Olympic Games in London gymnast Caroline Weber represented her Austrian homeland in rhythmic gymnastics. Wearing a dirndl-inspired leotard she performed her ball routine in Wembley Arena to music by Hubert von Goisern, who had provided a specially edited version of his song Wildschütz Räp for her 90 second programme.

The audience was clearly delighted both by her performance and the music, to which they were clapping along in just a few seconds. The BBC expert commentator said of the routine with its Austrian accents: "Weber showed a great theme routine," and after marks of 25.950 added that "she should have scored much higher." 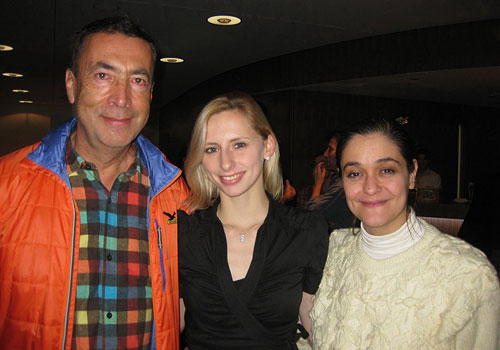 It began with a request from Caroline Weber to Hubert von Goisern's management: as to whether she could have an a cappella music excerpt for her new freestyle display. Rhythmic gymnastics has to be performed to music without any lyrics. The artist was immediately fascinated by the project and got personally involved: "I'm very proud that Caroline will be presenting my music at the Olympic Games in London."

The result of the creative work is an edited version of Wildschütz Rap (Poacher's Rap), specially made by von Goisern for the ball routine. Weber: "Hubert's interest and help is an honour for me. Rhythm gymnastics is a sport with a strong artistic, creative and musical note. We have even already talked in detail about continuing the collaboration."

Caroline Weber's new routine to Hubert von Goisern's music will have its premiere in competition at the Grand Prix in Moscow at the end of February 2012.