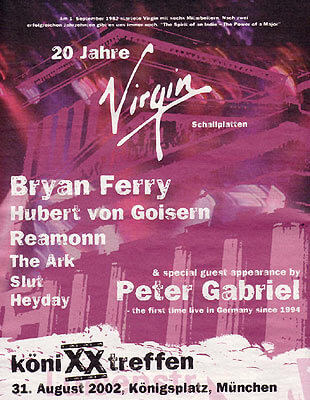 Munich. The German Virgin is celebrating its birthday - and naturally with a super party. The record company - brought into being as independent from the English Virgin in 1982 by Udo Lange - is now looking back on 20 years of successful. There is a big birthday party - the KöniXXtreffen - on Saturday 31st August in the form of an open air concert in the Königsplatz, Munich.

Live: Bryan Ferry, who was famous in the 70s as singer, songwriter and designer of the pop pioneer Roxy Music, and also celebrates success as a solo artist. Reamonn comes from the Black Forest - they stormed the charts with Supergirl. Heyday are also definitely not unknowns in the German rock-biz. The apocalyptic The Ark are coming from Sweden. And also the indie rocker Slut, songwriter Peter Gabriel and last but certainly not least the alpine rocker Hubert von Goisern.

... The party guests then relaxedly waited for a German-speaking sensation. Hubert von Goisern entered the stage: the revolutionary of folk music. Some people have perhaps already experienced it: the man grows at each of his concerts. He starts shyly, softly and rather restrained. And in the course of the appearance, he then becomes more powerful, exciting and charismatic. The eternal traveller, who has already explored Tibet, Egypt, Africa and several countries for himself, and embeds new ideas into his music again and again, conveys the motto of the 2002 tour: Grenzenlos ...

Hubert von Goisern: "Hit single strategy is foreign to me"

Munich (APA) - In Germany, the musician Hubert von Goisern counts, in comparison in his own country, the Upper Austrian is still mainly associated with one song. Nevertheless, the artist does not want to aim at a repetition of Hiatamadl. "Hit single strategy is a foreign concept to me," von Goisern emphasised to journalists in Munich at the weekend. The new album Iwasig (Virgin) comes onto the market on the 16th September.

The production has turned out very colourful, the palette reaches from reggae to the obligatory yodelling. "I always have the feeling that I restrict myself too much when recording. There is no room on a CD for all the souls which live in my chest," said Goisern. "But it is right that the record has a certain bandwidth. That's how life is too."

In contrast with an introverted work like Fön, Iwasig sounds more easily accessible. "Fön arose from the silence. That is why the album was subtler. Then we went on tour again after a long break. Through playing in front of the audience, my life became louder again. I wrote the songs during the breaks on tour, to take into account the feeling of how I felt at that moment." It was recorded in Salzburg and Bad Goisern.

In the summer, Hubert gave 23 concerts, only 3 of those in Austria. The event in Vienna was more poorly attended than appearances in Berlin, Hamburg or Cologne. "When you have a greater audience and media interest in Germany than at home, it is hard. But I don't want to turn into someone who, like Thomas Bernhard, declares: "everything is fucked up". Nevertheless Goisern remains direct as usual: "In Austria people didn't do concerts with me until they noticed that cash could be made. Not because they had culture in mind."

The ever decreasing readiness to deliberately have a good look at songs leads back to consumer behaviour: "Music comes from the silence and goes back into silence. We do not have this foundation any more. Only volume counts now. There are no quiet points any more." Music must be played live, argues Goisern: "The present, the non-replaceable - that is music. When you listen to the moment."