Hubert von Goisern in conversation about world music and management 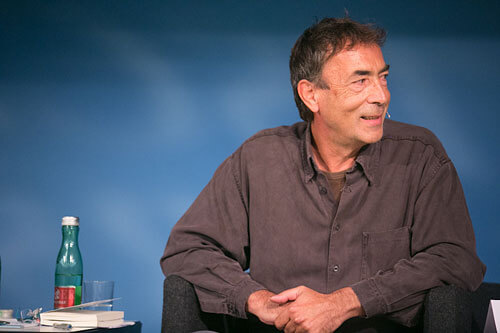 Hubert von Goisern sang his way to the top of the charts with a song about the financial crisis. In the middle of his successful tour he took the time to spend an evening at Open Minds at the Vienna University of Economics and Business.

His conversation partners were Edeltraud Hanappi-Egger, Head of the Department for "Gender and Diversity in Organizations" at the Vienna University of Economics and Business and Markus Hinterhäuser, pianist, Culture Manager and future manager of the Wiener Festwochen. The evening was moderated by honorary university professor Wilfried Stadler.

The lyrics of Hubert von Goisern's songs seethe. Those who listen carefully become aware that the banking and Euro crisis doesn't just have its roots in the weak construction of the financial and monetary systems - but the unfortunate excesses of a restless zeitgeist geared towards maximisation too. And nevertheless the successful singer-songwriter, alpine rocker and composer of film music does without answers that are all too simple.

Hubert von Goisern often paid a high price for his consequential individuality, before it finally became an unmistakeable "trademark", under which he is currently performing his hitherto most successful tour. In the Open Minds discussion on 8th October his experiences as a world musician with the management worlds of the business and the classical music world were put to the test. 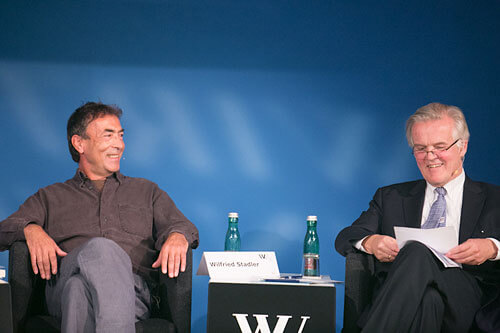 Hubert von Goisern on the meaning of money

Doing not just watching: Hubert von Goisern at the WU

"Everyone knows that money doesn't grow on trees and you can't eat it either, but it burns well" - Wilfried Stadler, financial economist, reads these lines as if a kindergarten class is sitting on a rug in front of him. "Does have that something to do with the financial crisis?", he asks. Hubert von Goisern answers after a medium-length pause for thought: "Less that and more the deplorable fact that food is being processed into fuel while every minute people are starving. Machines are being put above people. It's inconceivable to me and fills me with anger, that's where the refrain came from."

[...] Hubert von Goisern is not a loud man when he's not singing. He prefers to consider for a long time before he answers, listens, answers and is, as far as can been judged, honest. Stadler asks about his journeys to Tibet and Africa and Jane Goodall. All these things came to him, says Hubert von Goisern, who was born in 1952 as Hubert Achleitner. "I'm not a fatalist, but I have the feeling that the essential things come to you." Anyone not living in the here and now would miss a lot. He nearly missed out on Tibet because back then in 1995 he hadn't read his post. And although there were then still problems with the visa, the journey happened, not least thanks to his naïveté: "I said to my companion: nothing can happen. You have a Swiss passport. I'm famous." Hearty laughter in the hall.

On this evening it wasn't about the university and not about financial markets either. But rather about experiences and letting things happen. Far too seldom a subject at the university.