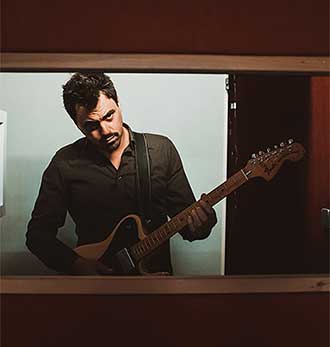 Since coming on board for the Linz Europe Tour in 2007, Severin Trogbacher has been the trusty guitarist at Hubert von Goisern's side - not just live on stage, but in the studio too. Most recently, Severin contributed to and played on Huberts Album Zeiten und Zeichen. The accompanying tour planned for 2020 then had to be postponed until 2022, due to the pandemic, as stages across the world were obliged to fall quiet. However, Severin took this opportunity to pour his pent-up creativity into an album of his own - the aptly named Perseverance.

Together with Jojo Lackner on bass and Herbert Pirker on drums, Severin has created extensive soundscapes, through which powerful, groovy streams of improvisation, fine melodies and complex compositions meander. A "no-brainer" is how Severin describes his decision to invite his music colleague Hubert von Goisern to make a contribution to Perseverance. He accepted without hesitation and lends his voice to the penultimate track of the album, Masterplan. "Be sure to listen to it," says Hubert von Goisern, "Not because I'm on it too, but because it's turned out to be a great album."