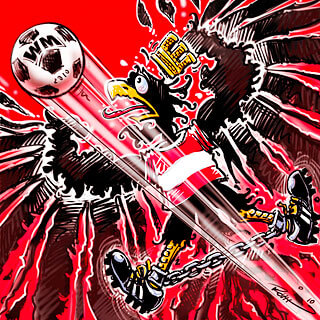 Here and only during the World Championship Rotz & Wasser - reporter Heribert Meisel in 1954, in a posthumous duet with Hubert's accordion and band.

The game: On 26th June 1954 Meisel commentated on the World Championship Quarter Final between Austria and Switzerland. At 40°C in the shade a long-lost team won in ultimately the highest scoring game of a World Cup final (7:5)!

the very best linguistic keepy-uppy, tripping, centring. when it comes to putting the sport of football into words, with all its fascination and emotion, then there is nobody better-appointed than the legendary sports reporter heribert meisel.

his description of (austrian) football: '...we're grappling for now with snot and water ...' is still valid in view of our non-participation in the football world championship in south africa.

solace can be found with grillparzer: "the austrian steps in front, has his own thoughts on the matter at hand and lets others talk - or in this case - run."

here's to great games for you - and me,
hubert von goisern