A stamp for Hubert von Goisern 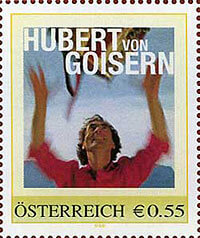 The parish of Bad Goisern does something for its famous son

After the award of honorary citizenship by the district council last month, now the next surprise: The parish of Bad Goisern, together with the Austrian post office, are spending out on a stamp with Hubert von Goisern.

It concerns a personalised stamp (Hubert with the accordion, from the cover of the Iwasig CD), with a run of 10,000 copies.

UPDATE 28.03.04: The original run of 10,000 stamps sold out in just 5 days, but a second run is now on sale. This second batch differs from the first with 'Hubert von Goisern' being written in smaller text, this time in yellow.