Far, Far Away: The World of Hubert von Goisern

A personal portrait on the trail of a musical discoverer, both at home and abroad:
Hubert von Goisern 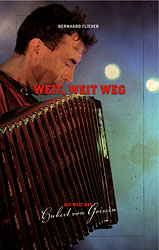 In 1992 Hubert von Goisern found fame across all borders with the song Koa Hiatamadl. He was considered as the most successful representative of "new folk music" and had become the founder of so-called "alpine rock". Yet his position on his musical trail between boundaries had barely been defined before he was somewhere else - departing and arriving to explore the sound of the world. And since then he has reinvented himself time and time again.

The search led Hubert von Goisern "far, far away", from Hallstatt to New York, from Bad Ischl to Timbuktu, from Salzburg to Dakar. And it also led him back deep into the heart of the very native tradition that he had revived and then revived anew - with what he had experienced "on tour": not restless, but curious and open. And thus to this day he has remained true to himself, not just musically, but in his social and political commitments too.

Bernhard Flieher has followed these journeys through many destinations and both the biographical and musical development, from the beginnings to present day. Along the way he describes the path that has been taken: straight ahead.

Searcher. Anyone on the tail of Hubert von Goisern will experience a great deal. SN editor Bernhard Flieher has written a book on the subject.

Weit, weit weg. This book written by SN editor Bernhard Flieher cannot be pigeonholed. Just like Hubert von Goisern, the musician, who is to be seen on the cover. 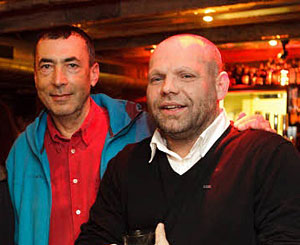 There were two questions to be cleared up at the presentation on Thursday evening at Jazzit. Firstly: what leads a musician to play in the most remote places in the world? Secondly: what kind of journalist follows the trail of this musician? The lowest common denominator of the answer: it is curiosity. It is simply in man's nature. He is simply always searching. And the individual's horizons expand in proportion to the difficulty of the search.

What the Goiserer's music has in common with Flieher's text is the recognition that all humanity has a common heritage at its disposal. That is not new. But both offer new, often very entertaining anecdotes as proof thereof. Hubert von Goisern for example, when he tells the story of his visit to the Samis in Norway. "They seldom spoke to me. And when they did, they rarely told the truth." Postscript: "But it wasn't a problem - I grew up in a place like that."

The guests were a motley crew: celebrities from the culture scene were there, as was the Goiserer's father. He came, saw and said not without pride: "Now they've even written a book about my boy."

Only one question remains: how did Bernhard Flieher manage to say goodbye to his little daughter Lola before his journeys? On Thursday she didn't even let him go on stage alone.

Since 1992 Bernhard Flieher, SN culture journalist, has been following the tracks that the restless musician Hubert von Goisern has left across the world. Thus he wrote reports on the sound of the world, which will be published in book form today by the Residenz Verlag: Weit, weit weg - Die Welt des Hubert von Goisern. The literary portrait of a searcher developed on tour between Hallstatt, Ouagadougou and the Ukraine. An extract.

Vylkove, Ukraine. Harbour.
27th July 2007 - Die Strass'n
A main road runs through the little town. The main attractions on this street are a freshly painted statue of Lenin and an art deco-style cinema. Only at the market in the street is there hustle and bustle. Ballpoint pens and plastic toys "Made in China". Colouring books for children from Moscow. The region is known for its strawberries and a wine-like drink made from quinces, called Molodok - at least it is by the regulars at the markets in the chic sea metropolis of Odessa a few hundred kilometres away.

Mrs Sovalev, who runs a small business here, sees her husband once a month. He commutes to work in a factory a good 1000 kilometres past Donezk. In five years Ukraine will host the European Football Championships with Poland. Donezk will then be the venue. In Vilkovo they will see as much of it as they will in Bad Goisern: they'll turn on the TV. Only here they can't be sure that they'll have electricity for a whole 90 minutes.

However the moon is the same as it is there. On these cloudless, hot days it accompanies Hubert von Goisern's Linz Europe Tour as an observer. With effortless and kitsch beauty it becomes the symbol of frontierless connection, yes, solidarity. On the ship this connection between music styles and ways of life has to be worked upon somewhat harder.

When on the stage above the glittering water of the Danube the video clip plays on the fancy screens during the song Die Strass'n, the scenery in the little town is bizarre. Stage ship and Danube waters twinkle like disco balls. Lights and screens, with which stadia could be lit, beam across southern Ukraine.

People are standing on a half-derelict mooring point with crumbling asphalt - they call it a harbour here, but that is somewhat over the top. In the southern corner of Ukraine time stands still, meaning: the changes are unnoticeable and where they happen, they help little. But nonetheless it's not peaceful in Vylkove. Pimped up western cars roar. Coca Cola, mobile phones, cheap disco music and satellite TV have already won. But there are otherwise barely any winners to be found in the romantic little world. After Russia Ukraine is the second biggest country in Europe by land area. The economic strength is accordingly difficult to distribute. Prosperity is growing in the cities. Revolutions are occurring in Kiev. International banking groups have long led business. Vylkove lies in a sleep that is always there and will always remain.

Quietness, but by no means disinterest defines the location on the evening of Hubert von Goisern's concert. In front of this remote harbour fast-moving images are played on the screens to Die Strass'n, symbols of a rapidly urbanising world. In some images busy people are scurrying about. Time-lapsed cars seem like toys in the street canyons of an anonymous metropolis. A camera flies just over railway tracks. For split seconds orientation is lost while watching. No goal is recognisable in these pictures. But the simple illustration of movement engenders uneasy astonishment. This feeling is strengthened, as behind the mooring point that has been turned into the the audience arena the world stands still in the tranquillity of Vylkove The hectic world runs in front and behind is the enticement of the supposed idyll of remoteness.

It is exactly this ambivalence of all places and actions, the calm and the excited, the surface and the depth, that Die Strass'n captures. References to homeland origins, to a regional tradition, are only in this song through it being sung in dialect and because a yodel appears too. But the instrumentation and gestures of the execution fit with the demands of the pop world.

The song Die Strass'n is played mostly fourth or fifth on the Linz Europe Tour. Before this song from the album Fön from 2000 the conquering set of powerful songs ends. The audience is to be won over with full thrust from the first second of the concert. With Die Strass'n - at least at the beginning of the song - the tempo is curbed.

The song has no direct addressee. It challenges the audience to make the song their own. There is also no narrative voice that is telling of an event. Hubert von Goisern collects and disseminates simple wisdoms: "Those who have never feared anything/will never dare do anything either/and those who have never loved/have never been alone."

Two verses and a refrain repeated as many times circle an eternal theme while travelling: apart from the streets that take you home or away, nothing is certain while on the road. The refreshing atmosphere of departure in yodelling, through which the song is structured beyond the classic verse-refrain formula, clearly describes the desire for a vast freedom. Self-determination is appealed to anthemically. It is all the same, which of the many streets one drives down. The main thing: travelling with a clear head.

Die Strass'n describes the quintessence of movement, how Hubert von Goisern carries it out as a musician. Only through a collaboration of movement and pausing, of restlessness and stillness does a halfway finished image develop.

No matter where we go, a world order in black and white, with exclusively pleasant human pretensions, or a permanently misanthropic attitude fails to bring us any new experiences.

Towards the end the song slowly flickers out. It sounds as though someone is on their way in a landscape without a horizon. Ever fewer instruments remain. The anthemic pop rock doesn't end with a sensation, but lets go of the listener very gently. Described is one of the few truths that is indispensable with human exchange with the foreign, with others, with the unknown: we know that we don't know anything, as long as we haven't tried it. And to that this song can't be abused as an eternally effective prescription for the convergence of worlds, Hubert von Goisern adds: "Nothing's true that isn't a lie too."