Homeland and identity were the subject of a school discussion in Salzburg with Sebastian Kurz, Musiker Hubert von Goisern and Integration Ambassador Razana Dürr-Mohideen

Wien (OTS) - On 23rd June Minister for Foreign Affairs and Integration Sebastian Kurz, musician Hubert von Goisern and Integration Ambassador Razana Dürr-Mohideen held a discussion with more than 200 school students in Salzburg on the topic of "Austria - our home". After the lively discussion came a showing of the film Österreich - Oben und Unten with music by Hubert von Goisern.

Kurz: Everyone can feel at home in Austria

Minister for Integration Sebastian Kurz said: "Everyone can feel at home in Austria, no matter where they're from. It's important that Austria becomes home for everyone who lives here, without them need to relinquish their roots. We want to motivate young people to deal actively with our homeland of Austria and thus find their place in our society."

Austrian musician Hubert von Goisern, who composed the soundtrack for Österreich - Oben und Unten, said: "My music should produce an understanding of the approach and attitude to life of the country from which I come. For me the word "homeland" isn't narrowly drawn, and it's not always to do with "feeling good". I've very quickly felt at home in many places, which made me realise that you have to do something about it yourself too."

Integration Ambassador Razana Dürr-Mohideen, who herself has roots in Sri Lanka, spoke about her integration in Salzburg and talked about her involvement with the ZUSAMMEN:ÖSTERREICH (Together:Austria) initiative: in her role as Integration Ambassador the hotel manager with her own background of migration visits schools to talk about the opportunities and challenges of living together, deconstructing prejudices and fostering motivation. ZUSAMMEN:ÖSTERREICH was founded in 2011 by Sebastian Kurz, to shine a light on successful ambassadors for integration as examples of successful integration. Today there are more than 300 volunteer ambassadors for the initiative, who between them have reached around 30,000 students with visits to more than 350 schools.

Students demonstrate what homeland is

Metres of snow can make you feel at home, just the same as a good kebab.
That will barely work in damp refugee camps. 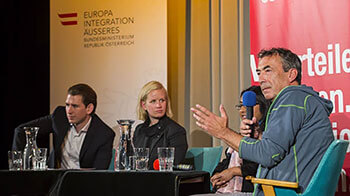 The question surprised globetrotter Hubert von Goisern. At a concert in Kiel in north Germany, a member of the audience told him he should speak High German. While the musician was still thinking about how one would formulate Heast as ned in north Germany, the rest of the audience protested. "We understand you," they said. "You simply need to relax your ear. Then you get on fine everywhere", the musician said to the students in the full auditorium at Das Kino on Tuesday morning.

The Ministry for Integration organised the event for students to be able to discuss the subject of homeland with Minister Sebastian Kurz (ÖVP) and Hubert von Goisern. For the musician, homeland is not tied to one place, but is rather a feel of familiarity. "For example, I've been to Greenland several times. On my most recent visits, I really felt at home. My homeland is constantly growing." Student Marie, from the Schule für Kindergartenpädagogik sees things in a similar way. "Home isn't a particular place, but rather the feeling that of comfort. I get that on holiday too."

Razana Dürr-Mohideen didn't feel at all at home during her first days in Austria. She came to Europe from Sri Lanka in the 1980s. "The snow was metres deep and it was freezing cold. We weren't familiar with that where we came from." But Austria soon became her home. What helped in particular was that she attended an Austrian school and quickly learned the language. Razana Dürr is on of 300 Integration Ambassadors from the ministry. Their task is to show that there are many examples in Austria of people with migrationary backgrounds who have successful lives. Razana Dürr is the manager of Motel One in Salzburg.

The audience pricked up their ears when Hubert von Goisern said it's difficult for him to feel at home in Salzburg at the moment. "I've often had the feeling that I don't belong. It's difficult to be part of society here." Student Erik from the Wirtschaftskundliches Realgymnasium couldn't let that stand. He had often seen how fellow pupils from other countries quickly made a connection. "What's important is to talk to each other a lot. Then it works at school just as it does in a football club."

Maximilian from the Christian-Doppler-Gymnasium wanted to know what Foreign Minister Kurz thought of the tent cities, which were constructed at the police department for refugees. "Can you explain that? Here we get the impression that the tent city is the work of an overextended ministry." The great round of applause showed that many of his fellow students shared his opinion.

Kurz justified the tent city, saying that Interior Minister Johanna Mikl-Leitner (ÖVP) had been left to work alone for too long. In the short term, there had been no other solution. "And we didn't want the kind of situation seen in France, where refugees are sleeping in the underground, or camping in the wild." He started an initiative to help refugees integrate into Austria. This year an additional 10,000 German language courses are available.

Nadile from the Christian-Doppler-Gymnasium had seen for herself the situation in the tent camp. Her impression: "The refugees have no clothes, no kettles. They're traumatised and need our help. Each one of us should make a contribution." She too earned great applause for this appeal.

There was also something to make people smile. A young student asked the Integration Minister whether he liked eating kebabs. Yes, he said. "If it's made well."