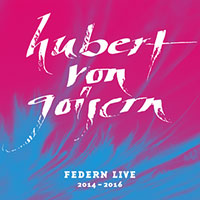 the recordings were made in 2014, 2015, 2016;
the applause between the songs has been edited and we've cut out the anecdotes to save them growing old quickly.
nothing has been edited in the music. it is unadorned, so to speak. it is for just that reason that its magic is to be found within.
huge thanks to my band: alexander pohn (drums, marxophone, vocals); severin trogbacher (guitar, vocals); helmut schartlmüller (bass, vocals); steve fishell/2014; and bob bernstein/2015+2016 (lap steel, pedal steel, resonator guitar)

of course thanks go to the many organisers and numerous local colleagues too, as well as the audience. even after all these years and the many successful tours, i still find it astounding and anything but a given that people come to our concerts in such great numbers and it fills me with joy to see how this audience consists of people from all walks of life and across generations.

i can't imagine anything better and i bow to you all.

Hubert von Goisern was drawn to the USA. To the bluesy swamps of Louisiana, to shimmering, thrilling New Orleans. To Texas, to Nashville. Wherever the heart of American country music could be heard beating particularly loudly. Federn was the name of the studio album, Goisern's own individual take on country music, which has far more in common with alpine folk music than you would ever think. Federn was also the name of the tour, which over the course of two years, took Goisern and his band all over Europe. And across the big pond: the bluegrass and country rhythms that fit our traditions like a lightweight, groovy glove, were to be heard on the stages of New York, in Washington and at the South by Southwest Festival in Austin. Federn was one of Hubert von Goisern's most exciting musical projects. For it showed us commonalities - and differences. Highly political, but entertaining. Live it had a rousing, powerful intensity, and rapturous and vibrant. Federn Live captures this atmosphere - and tells the story of a special journey. With Federn Live a ten-year collaboration between Hubert von Goisern and his brilliant live band draws to a close. What will come next? We'll see.