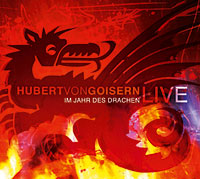 At live concerts there's no net and no double floor - every note, every chord is truth (the truth is not always beautiful, but beauty is in the ear of the beholder). It is said that the truth cannot be said often enough - perhaps that's wy we played so many concerts.

thank you cannot be said often enough either. so a thousand thanks for this wonderful time we shared, in both the large gatherings at concerts and the small, but beautiful community of our team on tour.

I'm dreaming - like all those who were there - of a reunion. Inshallah, or in English - God and ourselves willing.

"At live concerts there's no net and no double floor," says Hubert von Goisern, "every note, every chord is truth".

The truth of Hubert von Goisern is: there are no boundaries of musical variety. The Austrian musician has been reinventing himself for more than 20 years. And comes to the heart of his music again. Himself.

Brenna tuats was the tour for the multi-award-winning album Entwederundoder - and was the most successful of his musical career. Live music from a tonal density searching for its own kind. And at the same time coming in purged, light and with an unmistakeable groove. Capturing this all on a live CD is the right step to make the concerts unforgettable.

Im Jahr des Drachen is:
The essence of 101 concerts played to more than 300,000 spectators.
The essence of the Brenna tuats Tour in the year of the dragon 2012.
2 x 9 songs that make the air burn.
A musical spectrum, a style mix that delivers neither one thing nor the other. The music has never been more diverse or memorable.