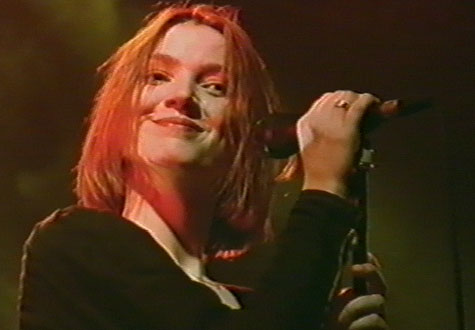 She inspired Hubert von Goisern to establish yodelling as a stylistic device in the Alpinkatzen. At the age of 12 she became the country's youngest yodeller when she joined the Walchsee Seerosen Trio with her father. The group released a record. Hubert von Goisern, already on the lookout for a female singer for his Alpinkatzen project, was given this record by his neighbour, Sabine's aunt, not without ulterior motive. And at the age of 16 Sabine was in the studio with the band.

After leaving the folk music troupe Sabine made a number of disco appearances, singing to instrumental playback tracks of hits by Madonna & Co. And right at the start of her hairdressing apprenticeship, she told her boss: "When I have trained, then I'll stop and start singing." And that's exactly the way it was: in June 1992, the day after her final exam, she was taken on permanently by Hubert.

"I still remember exactly, when I was on stage for the first time with Hubert and the band in 1992 in the Munich Lustspielhaus. I was totally fascinated by this group from the outset. When I stood next to all these outstanding artists, I just thought: "They do not need me. No, I'm just a shy person," mumbles Zabine in embarrassment.

"We had only a half day for rehearsing, but this appearance became a magical night for me. It was also unbelievable for me that we had a bigger audience every evening - purely by word of mouth! I think the Alpinkatzen were really something special."