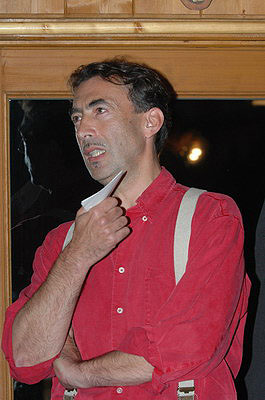 Among friends, invited by mayor Gert Aigmüller, Hubert von Goisern was presented with the certificate of freemanship after the end of his celebrated Trad II tour. At the wish of the artist, selected relatives, acquaintances and friends were invited, so there was a exchange of thoughts between teachers from school time, school friends, musicians and parish representatives. Hannes and Siegfried Hillbrand played the Styrian accordion and Wilfrid Kefer played the double bass.

In his speech to the "youngest" freeman of Goisern, Mayor Aigmüller spanned the arc from his childhood, through his first musical attempts, to the breakthrough in the German-speaking music scene with the Alpinkatzen. Humanitarian projects followed, a successful comeback CD after nearly five years away from the stage and great success with records and tours since the beginning of the third millennium. The market town of Bad Goisern has Hubert von Goisern to thank for an undreamt of international fame on the basis of his stage name. His commitment to peace and cultural exchange between people is specially referred to in the certificate of freemanship.

With witty but also critical comments, Hubert, visibly moved, gave his thanks for the recognition of his hometown, to which he sometimes feels a strained relationship and constantly analysed his position to the place and its people. A German magazine wrote the sentence so characteristic for him: "I am shaped by the mysticism of the mountains and valleys, the landscape in which I grew up and in which this music developed." He explained how he initially had to go on a confrontation course with the "folk music establishment" in order to realise his musical thoughts and bring his versatile perspective of music nearer to people. The unforgettable Simon Geigenmusi and the Goiserer Viergesang were the triggers of his occupation with pure folk music.

Especially in recent years, he found his own perception of music, effectively a translation into the modern, from distant countries he let roots of traditional music flow into him. HvG expressly thanked his musical role models such as Fritz Hillbrand (Toifl Fritz) and Sepp Atzmanstorfer, as well as the unforgettable thoroughbred musician Werner Schilcher. Time and time again, Hubert has taken a political stance, and he explained his motivation with clever thoughts of his youth. In response to the query as to whether he expects privileges as a freeman, Hubert Achleitner said that no street or square should be named after his, he wishes rather more, probably with a little irony, for "a fresh raisin croissant from Huberbäck every day, because he often comes too late and this delicious pastry is usually already sold out."

For me, as someone who has known Hubert as a schoolmate since his youth, "he is and remains a traveller - but he returns again and again." 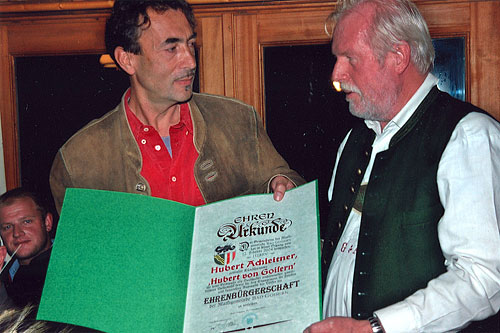 Hubert von Goisern a freeman of that very same place

Linz - On Thursday evening the district council decided that Hubert von Goisern will be given the freedom of his hometown Bad Goisern in Upper Austria.

The mayor of the Salzkammergut district, Gert Aigmüller proposed a motion to make the famous son of the market township a freeman. This was decided with the 24 votes of the SPÖ and the 8 votes of the ÖVP, the five representatives of the FPÖ abstained - which, so it is reported, was received by the other councillors "with head shaking".

However, the chairman of the FPÖ parliamentary group, Franz Leitner, expressed doubts, which he also repeated on Friday: "Hubert von Goisern does not miss an opportunity to denigrate us and put us in the right wing corner, which isn't right." He otherwise has nothing against the musician. He has done a great deal for Bad Goisern and he has always got on with him very well personally. Hubert von Goisern is three days older than him and they grew up together and played music together. Only politically do they have different viewpoints. It is reported of Hubert von Goisern that he said of Jörg Haider, who also comes from Bad Goisern: "He is worth a statement to me, but not a song."*