Rhythm leads everyone together

Culture as a two way street:
why Hubert von Goisern and the Egyptian pop star Mohamed Mounir are going on tour together

A lot is said about the dialogue of cultures. Nevertheless, you can't shake the feeling that some people do their own thing and clichés boom. Or is it not so bad with the thought of one world?

"That must probably be a mistake," though Hubert von Goisern, when last year the Goethe Institute asked him whether he wanted to do something with Egyptian musicians. It was no mistake. There is still the cultural dialogue and whether someone comes from Austria or Germany plays no role. Because HvG was tinkering away at a journey to Africa with his band anyway, it was rather convenient. Making journeys and music interests him. And who knows what comes out of it...

What came out was what not many would have expected. The celebrated Arabic pop star Mohamed Mounir and the Austrian world musician did not just give one joint concert in Upper Egyptian Assiut, a former fundamentalist stronghold. A friendship arose, which went over and above the musical and will to lead HvG to Cairo again - and will lead Mohamed Mounir to Europe this year. But in turn.

It is three hours before the start of the concert, as on 13th March 2002 the Austrian world musician and the Nubian pop star meet in an Assiut hotel room. And one would probably be lying if one said that they had understand each other perfectly from the first moment. One spoke no Arabic, the other only moderate English. Not the best conditions for a conversation. Then the clock was still breathing down their necks: in 180 minutes they were to go on stage.

And suddenly he beamed

Somewhat tense and a little timidly, the two begin to improvise with their music. Ten minutes have not gone by and Mohamed Mounir's and Hubert von Goisern's faces relax: their very different music finds common ground with rhythm, suddenly one beams all over his face as he sees what sounds you can make with a Styrian accordion. And the other is inspired how the whole thing harmonises with the oud, the Arabic short-necked lute.

And then the concert. Already in the afternoon thousands of students and young people are crowding into the campus of the university of Assiut, in order to later command the best place in the enormous square. The stewards and police try to restrict the more than 17,000 people in their euphoria, but again and again cordons and barriers are broken through. Despite everything: it remains peaceful and as Hubert von Goisern steps onto the stage, the audience cheers. They are curious about the person, whom they quickly name "the man with the saffron trousers". However, it confuses the Austrian that the people barely clap after a song. Later, during Mohamed Mounir's appearance, he then notices that that is probably normal. Enthusiasm is not articulated here in the form of applause. As he is fetched onto the stage again by the native pop star during Mohamed Mounir's appearance, the people shriek and cheer. There it is again: the rhythm, the singing, the movement - it knows no bounds. After the concert HvG and his musicians have to shake hundreds of hands, give autographs and are showered with questions and compliments. Has one already experienced that in Europe, that the people are so curious and eager to learn after a concert?

But there is still a little more than the fascination and the interest for foreign, unfamiliar music. After three joint song at the concert and after a long evening at Mohamed Mounir's house, the two discover that "they must simply do something together". Mounir is not only considered as a pop star in Egypt, with his lyrics referring without exception to society and politics, he is considered by many in his homeland as a mouthpiece. The musician from Nubia sees himself as a mediator between the Orient and Occident. Both musicians see the fact that the Euro-Arabic dialogue is especially important in these times as a self-evident truth - also because since the attacks on 11th September, the world is littered with clichés. And perhaps the fruits of these dialogues can be offered a still much larger audience.

Now, a year after their first meeting, the cultural meeting in Europe will be put into action. As Mounir used his popularity in Egypt to present HvG, Hubert von Goisern will use his fame to offer the Arabic star a forum in Germany and Austria.

A giving and taking

But that is naturally not all, because collaboration means more than standing together on the same stage. In the meantime, the two musicians have rehearsed various songs which they will play together on their tour. With the help of the internet, for months they have been sending sound files here and there, exchanging, working on new songs. If everything goes as they currently imagine, they will release a single together.

Perhaps then a few people will see again that cultural dialogue is not just a occupation for aesthetes, but a central aspect of international relationships - and indeed not just as embellished details which accompany the foreign policy. As the former Federal President, Theodor Heuss, once said of cultural politics: they should be a peaceful giving and taking. No one-sided German culture export, no German leading culture for abroad, but a living exchange of experiences and ideas in a globalised world, in which not only the economy can be globalised.

The meeting of Mohamed Mounir and Hubert von Goisern has shown how little it actually needs for two such different cultures to come closer together. 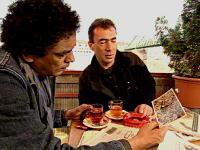 The Egyptian popstar Mohamed Mounir and the Austrian alpine rocker Hubert von Goisern - an unusual pair of musicians. Their story is also unusual: with the mediation of the Goethe Institute, the pair met a year ago in Egyptian Assiut, a former fundamentalist stronghold, and just three hours before a joint concert. The professionals pulled themselves together and began to improvise. The musicians quickly found a mutual rhythm, the Styrian accordion harmonised with the Arabic oud lute.

The alpine rocker Hubert von Goisern often gets stimulus in other cultures. As an idealist he dreams the dream that music connects the people. In Assiut the dream seemed to come true. The concert was an amazing success.

Yesterday in Frankfurt. The war rages in the distance and yet is present everywhere here. Hubert waits for his friend Mohamed. But today he is getting up late. "Egyptian body clock. Chance for a walk around Frankfurt's Town Hall square, the Römerberg. A postcard of destroyed Frankfurt. German newspapers. And Arabic for the singer. It is now 13.00, the night owl Mohamed is now awake. Since the bombing of Baghdad has begun, the two have talked about the war again and again. Hubert shows Mohamed the postcard: "I found this picture of Frankfurt, it is from the end of the war. The people here experienced what destruction means. So therefore they are against the war too." 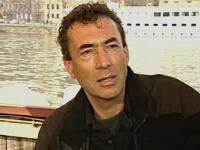 Hubert and Mohamed do not see themselves as political ambassadors. Their message is music. That is why they do not want to be considered as naïve: "It is much more naïve," says Hubert, "that one believes in bringing about peace through war, and that is probably clear to everyone. I think that playing music, as we will in the summer, for two weeks, on tour together, standing on stage together, singing in front of thousands of people. That is a feeling of being together. Not just for us, but also for the people who also experience it. It is a great celebration of an avowal of friendship."

In Assiut there was an avowal of friendship not least between the Styrian accordion and the Arabic lute. In Frankfurt: pictures of the war in German and Arabic newspapers. In both countries dismay at the violence. And fury at the USA. Above all in Egypt the abhorrence of the Iraqi dictator seems to step ever more into the background. "In Egypt," says Mohamed, "there is a lot of sympathy for what is happening in Iraq. It is shown through daily demonstrations, through loud protests. But I would like to also say something about it. I think that this war is completely unfair. Because on the one side there is enormous power and on the other side nothing at all. But I hope that we, the people who do not want this war, are in the majority. That is why we must win through at the end, I hope." 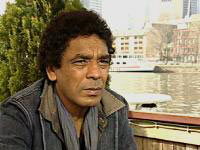 The dialogue of cultures at least worked in Assiut, and 17,000 cheered. "I believe," says Hubert, "that it won't hurt us just because we get involved in another melody, in another kind of rhythm. It is only enriching. We put ourselves next to each other and show that it works. Every hour that I spend with Mohamed, I learn a bit more about him and also from him."

And Mohamed: "There are very many thing, which we should still learn. We must understand what happens around us, be open. But we must fight ignorance and dictatorial regimes."

Fight with words and music - these days an almost touching notion. In June and July the two musicians are going on tour in Germany together and are also playing at Hessentag in Bad Arolsen among other places.