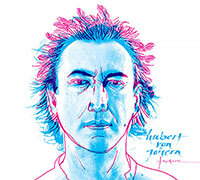 In the beginning there was the desire to understand America better. Over the years, you could say decades, the land of boundless opportunities has become a land of boundless impossibilities for me. And so I thought I'll go over there, to where the pain is - to the southern states, but if I do, it'll be where a lot of music is played: to Nashville, Tennessee. For a long time country music was something that made me cringe, Musikantenstadl with a cowboy hat, musical Jehovah's Witnesses and denial of reality in notes. Ring of Fire was the first country song I can remember playing; mind you, the version by Eric Burdon. I was 16 at that point and I had no idea that the song had been written by June Carter, neither did I know about the version by Johnny Cash with the brilliant mariachi brass in two-time rhythm.

Having arrived in Nashville, I began my research with the historic recordings by Hank Williams and the Louvin Brothers, burrowing back all the way to Jimmie Rodgers and landing in the lowlands of David Allen Coe, the God be with us alls, who only look for the noble and pure. Present day Nashville didn't have much to offer. The city made an impression less as a creative scene and more as a successful music industry location. A unionised studio operation that stands at the ready for money. So I moved on to Louisiana. In New Orleans I followed in the footsteps of my old role models Muddy Waters and Louis Armstrong, diving into the world of blues, jazz and zydeco, impressed by the unbelievable virtuosity of all the musicians, not least those who played the Cajun accordion, an instrument that is similar to the alpine diatonic, but with only one row of buttons, instead of the 4 that are usual over here. With abundant impressions, but admittedly a good many disillusionments too, I returned to Europe. The music here is part of my processing of this journey; the hopefully successful attempt to bring what there is in common to the foreground and to make audible historical and cultural bridgeheads.

Hubert von Goisern has the blues. Hubert von Goisern also has: variegation and the shimmering energy of New Orleans. This special southern states feeling. He balances all this on the basis of his own tradition, which comes from the Alps in terms of geography, but is practically the whole world in a musical idea.

Hubert von Goisern has been on a musical journey through the south of the USA. And what he has brought back with him is carefully crafted, from the powerful rock numbers and swinging country songs to the heavy-hearted ballads. The musical window to the world is wide open. It's all Goisern.

On Federn (Feathers) Hubert von Goisern plays with a few familiar numbers. The sage and cool Hank Williams cover Es is wahr (It's True) comes over with so much swing and such an intense groove, that you can't shake it from your head. So a Segn (Such A Blessing) could be an ancient Austrian folk tune - but in truth it's Amazing Grace, compactly instrumented and nonetheless epic and dreamy. A bluesy shrug of the shoulders: the Monk number I bin ganz alloan (I'm All Alone) or the lightly frivolous appeal to Corrina with the words: Des kann's nit sein (This Can't Be It). In contrast surges the fast, loud, cheerful Singa gang guat (Singing Would Be Good), in which you can still identify the original song – namely Oh, Susanna. Another ear worm that doesn't let you go - although not tailored, ironed out, or without friction. How does he do it?

The really outstanding thing about Federn though is the musical and thematic breadth. In his own original compositions Hubert von Goisern succeeds in hitting the mark in such a direct and straight forward manner that you go with it - right from the off and full of passion. On the one hand it's his unerring instinct for melodies, which feel new, but somehow familiar, and the earthy, genuine, arrangements concentrated on the essentials. However it's also down to the depth of his lyrics: Snowdown is a furious, rousing blues about the courage to speak the truth in a society in which deception plays an ever greater role. It's highly topical and feels even more urgent when Hubert von Goisern hurls out his anger.

The blues continues in numbers like Am hell-lichten Tag (Bright Day), a hesitant but honest shake of the head at people and things that darken a moment. Here Goisern is sunk deep in the heavy, vivid sounds of the Southern States, only to break free again in the faster songs. They are so energetic, so free and driving that you involuntarily take up the beat. Because you can't help yourself. And because this mixture of Cajun, country, bluegrass, pedal steel and accordion brings you to it with such joy.

Federn is light work: the rhythms of country and bluegrass music needn't be cobbled together, they fit like a glove with the Austrian sound - as if there had never been any other way. It's extraordinary how Hubert von Goisern manages this time after time: you simply feel as though the whole world is your home.