HvG: I've always seen myself in the role of host with this project. A host who on these journeys was always ready for mischief, just like the artists who came onto the boat with us with wide open ears and senses. They all inspired us a great deal, because from the very first moment they revealed to us how big and unique what we were doing was. After a few weeks on the ship you forget what an incredibly wonderful and exceptional circumstance it is in which you are living. The guests refreshed this appreciation time and again. It took five minutes on the ship at most before everyone's eyes lit up.

Now these journeys are happening in a compressed form as a festival and once more we are entirely letting ourselves in for what the guests will bring with them. The festival only lasts three days, but with the "warm up" rehearsals, it's a week. That is how long the great musicians from the east and west will be congregated in Linz. There are very exotic components, explosive joy in playing, fantastic artists and performers. More than 100 people are coming together in the smallest place and an enormous firework of creativity is going to be ignited.

"The Linz Europe Harbour Festival will be a unique festival of encounter, for both the audience and the musicians taking part. I know everyone who accompanied me on the Linz Europe Tour 2007 - 2009, but many of them have not yet had direct contact with one another. I hope that everyone will be happy with this programme and I'm really looking forward to the musical collaboration. I'll be on stage for three days, playing a different set each day. The guests influence what I play and through that synergies arise with all the bands that cannot yet be estimated."
Hubert von Goisern 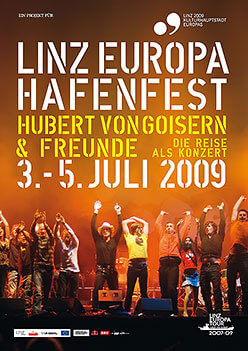 The confines of a ship leave little room for self-will, but the scope available to Hubert von Goisern and his band during the two summers on the Linz Europe Tour was used fully. The amplifiers were turned outwards: always a good way to get foreign terrain vibrating. The work inside succeeded based on the same principles too. The energy came from the tightness of time and space and from the exchange with musicians, who came on board along the way. The interaction did justice not only to the Austrian's alpine inheritance and his love of the traditional sounds of foreign lands, but also to the way it was expressed in wild, hard rock vehemence.

In the summer of 2007 a very young band was let loose with the Goiserer on the stage of converted barge - first they travelled eastwards along the Danube, then in summer 2008 they travelled northwest, along such waterways as the Rhine Main Danube Canal - where David Lackner (keyboards), Maria Moling (percussion, vocals), Alex Pohn (drums), Helmut Schartlmüller (bass), Elisabeth Schuen (violin, vocals), Marlene Schuen (violin, vocals) and Severin Trogbacher (guitar), as well as Darinka Tsekova (gadulka) on request let rip with the various guests.

Zdob și Zdub from Moldova with their version of Hiatamadl, the Serbian alternative thinker Rambo Amadeus, or the "Romanian Madonna" Loredana Groza - to name but a few - brought Eastern Europe close enough to touch. The for many less mysterious west was represented by the brilliant ship's guests of 2008: BAP, Xavier Naidoo, Konstantin Wecker, Klaus Doldinger and Zap Mama were among those to undertake the adventure of performing on the ship.

The adventurous river journey of the Linz Europe Tour is now over, the concert barge has returned to its original purpose, carrying ballast along the river - but the energy and joy in both playing music and meeting other musicians and people is being carried on into 2009, the year in which Linz is the European Capital of Culture.

From 3rd to 5th July 2009 the finale of the Linz Europe Tour will be taking place with a festival, in which nearly all the protagonists of the past two eventful and richly musical years will join together on stage. Anyone who could not make it to a concert on the route to the Black Sea or Amsterdam now has the chance to see how these exciting musical encounters will be recalled, not on board this time, but still together with Hubert von Goisern on stage.

The three-day programme will be carried by Hubert von Goisern and his band, who after the end of the leisurely forward motion on the barge took on a terrific concert hall tour at a faster tempo. Hard rock booms. Pop bubbles. There's inner alpine yodelling. Luxuriance never becomes lost in the details.